seems like the ladders was the place to be again

The Ladders are still improving in condition; more ice at the bottom of Central Gully (according to Jon) & lots of frozen turf. Gallipoli was in excellent condition tho' with heaps of spindrift! A 3 star route. We were followed up the route by a young Greg Cain. Ice Fall Gully & Pyramid Gully were also climbed but don't know what happened to the party on Central Gully who seemed to be struggling to avoid the crux & a team who were headed for Ypres/Artic Fox. Grimer was also there but not sure which route he was headed for; he rated Pillar Chimney & "El Mancho"!! on Clogwyn Du!

A pics attached so you can seee how good it was! 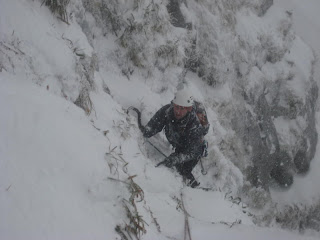 We were also on the Ladders today, and had a quick early morning romp up Pyramid Gully.
Still a fair bit of ice in there although it was very britle and, 'dinner plating' with every placement!
Bomber neve under the layer of fresh powder, and heaps of spindrift! see pics below 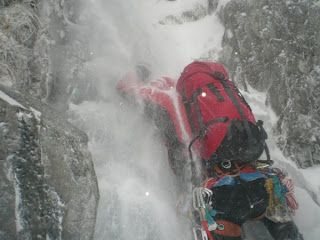 Went up and climbed Main Gully on Glyder Fach today, loads of firm neve and some good ice; just had to avoid the odd river of graupel flowing down the route when the heavens opened! The direct 'East Gully' start looked very mixed so I did the traverse in. Few inches of fresh snow on the tops, poor visibility and a brisk wind, in stark contrast to yesterday... 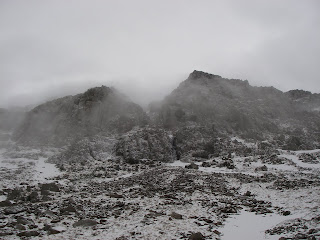 Posted by Mark Baggy Richards at 16:26