Appendage Repeats- Cascade is In - other news - Will it all slow down ??

Having only time for a short day I joined Owen and Tim Jepson for a trip to Idwal. We climbed the Devils Pipes in Idwal and I was keen to have a go at the Devils Appendage VII-7 . However, when we arrived at the base of Appendage, a large piece of the first pitch was lying on the deck. Apparently this had gone about 1 hour before, leaving the second hanging from thier tools. If this is true all very exciting, but either way, for me that was a good enough excuse not to get on it . There was a team just finishing the top pitch. It does look a fantastic route.

There may be news of another great 2nd ascent in the kitchen on Friday. Fingers crossed

The cwm was mobbed today, climbers all over the place. If your bold and handy the Appendix will go, The kitchen is in nick at V-5, all routes left of the kitchen are in. There is some brittle ice around. 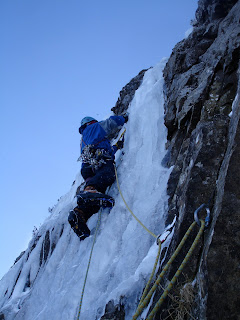 On Tuesday, Stu ?? Chris Thorne, Tim Neil and Chris Forest bagged the 2nd and 3rd Ascent of the Devils Appendage. The route apparently has gained great status already as a fine ice route and one not to be underestimated.

As Tim Neil states Devil's Appendage. The route is even better than the brilliant name. Stu and Chris had just been up it, and another friend had given it a valiant attempt but left it for another time. It's very thin through the bulge, and involves strenuous hooking/yarding on fragile hooks. This leads to more atmospheric and highly featured ice and a great stance. Top pitch great too!

Libby Peter and i did Cascade ( Thursday ) in 2 long pitches 60m ropes.Firtst pitch is not that thick ,but placements are good ,so take short screws. The rest is brilliant with good belays,If you combine first two pitches ,you can reach a rock belay on the last pitch with a little spare rope. 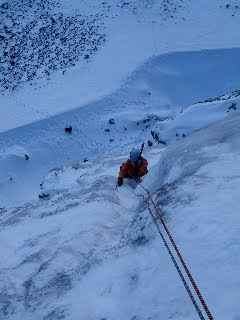 A few other tit bits

Seems like it is a real pig, to walk in, I hear, since this dump of snow. Not sure what the routes are like. I am sure someone will go in on weekend

Thursday - "Irish Mail" on Railway Buttress. All the routes there look in good nick. This one had a great pitch of 4 & then 3 more of 2 to the top. Did it in the dark to give it a sporting chance!


Thursday - Went into pass and up to Graig y Rhaeder.Easy approach ,but lots of snow. Did Botany slab not in that good nick ended up hanging on one axe as the slab beneath my feet dissapeared. Be good with a little more freeze. Also soloed Mortuary Slab V very good one steep pumpy pitch ,but plenty on it and you could get screws in . Cascade is there,take short screws!

Tim Neil, Chris Forest and Keith Ball cliamed the 2nd ascent of Birdsong only 3 days after the first ascent. However, on Sunday it,s third ascent was done by Steve Long and Paul Platt. Both parties report good climbing and the grade has settled at V1-6

Considering its taken upto 12 years for some of Parkins routes on the ladders to recive 2nd ascent this shows the keeness of late.

Peter Holden and I went in search of Infidelity but the cloud was down to the bases of the routes so we couldn't locate it. As a result we choose a clear thin fault line left of Sinister Gully but right of Infidelity. This gave 2 50m pitches of steep 3/4 climbing in grooves and a narrow chimney (good spike belay before this section) then 30m of easy snow to belay on The Ramp. (Peg around the corner). A steep chimney then led directly up behind the belay for a further 50m with a couple of sections of 4. A further 100m of easy snow to the summit. We had no doubt it had been done before but its not in the old book (any ideas?) and was a clear line giving a reasonable route in poor vis. Probably not a natural ice line so needs neve(which we had)/frozen turf.