Chris Hooper as been out enjoying the variety of routes this recent good spell has offered. In the process, he has been avoiding the crowds and having the crags to himself ( and at times his climbing partners ) However, the main news here is that he has been clocking up a few new routes in the process amd grabbing a few ascents of routes which have not been climbed for years. In addition to this, Chris has also been putting topos together for the nation to use. Tops marks to Chris on all accounts.

Cherry Gully 150m II/III (?) 30 metres left of Red Gully. Start by climbing steep flakes to the left of the large block this leads into the gully proper and is broken up by a number of icy / rocky steps. Continue to follow the gully, at its end veer right, up a tricky step, which leads up into a groove; then out onto the rib which you follow easily to the top.

Raven Gully 160m II (?) 25 metres left of Red Gully. Start by following the gully to the right of the large block. This leads you towards a small cave. Climb the slab to the right of the cave entrance then head directly up towards a large 'notch'. Above this the angle eases, follow the shallow snow groove to the top.

Been back up to Foel Goch today with Jim Potter to do another line on the crag, again can't find this one recorded anywhere, so will name and grade it for now.

Seal Gully 200m II (?) Start at the top of the snow cone between Red Face and The Curver. Follow the obvious gully above, protection is fairly sparse on the first pitch (55m). Second pitch continues up the gully and climbs the rock grooves above (left) to a belay on threads/spikes (55m). Follow the rib above to the gully headwall and traverse diagonally right bringing you out onto a uniform snowslope (avalanche danger) leading to the summit ridge.

Good to see two teams on The Curver and a team on Yr Esgair. Just a bit of info... with the change in wind direction and fresh snowfall Easy Gully (descent) is being loaded with windslab and shearing easily on the old base.


Went into the right hand side of Cwm Cywion and climbed 2 routes that are not in the guide, so if anyone knows their names etc please let us know! Route 1 (IV, 4+?) has a fantastic steep ice pitch which leads onto a pitch of (III) then a snow/mixed ground (II) to the top. Route 2 (II) has a great first pitch of ice and then good snow to the top. Easy descent via a grade I gully (it has a few steps in it). Go check them out... but be aware the top of this crag gets the sun and so an early start is recommended.

Then went over to the False Banana Gully area and did No.1 Gully (III), a route in great condition. North East Ridge descent to finish off, meeting lots of folk on their way up enjoying the views.

PS - if someone else has climbed them before then let us know, don't want to claim something that has been climbed by someone else! 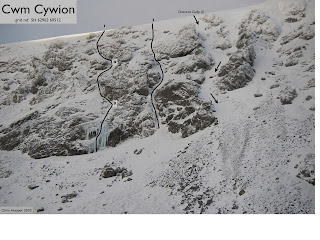 John Tatam and I headed into Cwm Silyn today ( Monday 4th Jan ) , no-one else around! Climbed Mask of Death in good condition, shorter screws very useful, a grade V in current conditions, 2 excellent pitches. Next was Bedrock Gully, I climbed the meat of this route in one long 50m pitch, sketchy ice in places and very little gear, more like a grade V in current conditions. Colin's Gully also looked in nick, although a bit thin in places. 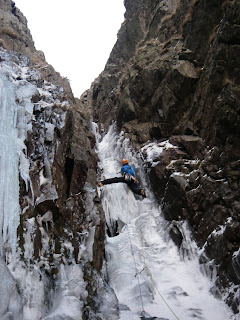 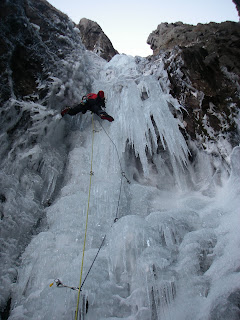 We climbed Maesglasau today (excellent but I fear that it may have fallen down by tomorrow) and when we arrived there was a pheasant shoot going on. All good fun watching the tweed claded gentry release a barrage of lead into the sky and we got the opportunity to chat to both the game keeper and the farmer. They are more than happy to see climbing going on but the approach route given in the North Wales guide book is no longer viable as it cuts right through the middle of the pheasant pens, and as I've seen today this is big business round these parts. In actual fact I guess the route was never a legal right of way. The best way to approach the falls is to traverse in around the back of the cwm from the east. There are a couple of paths marked on the OS map and signed on the ground that lead you to the start of the traverse. All of the traverse is then done on CROW Act Access Land.