Luck on the last day in particular for my client Alistair

Today was one of those days, when in the end, it all works out. I thought my plans for today were well sorted and for once early. Having missed another days climbing on Wednesday due to the school being shut yet again !! I had arranged with Dave Evans by mid morning Wednesday to go and have a go at the Black Cleft today. This is a classic ice and mixed route up on Cloggy at VII-7.

However, by 7.00pm last night it was off due to that damm school again. With the Cleft out of Radar, I phoned Alistair up one of my clients asking him if he could get Thursday off. He was keen for the Appendix this year and it looked like Thursday would be the last day of this good period. Need to grab it while you can. A few hours later and the answer was YES from Alistair. However with the forecast suggesting temps above the summit for Thursday there was that uncertain outcome.

With a late start today, you guessed, it that damm school, we arrived at the base of the route with only 1 team ahead and conditions looking good. Great It is on.

One had to be quite gentle on the first pitch, in particular stepping onto the column. I ran the last two pitches together to avoid and awkward belay with this pitch proving a little taxing on the traverse high up. Topping out in the sun was the icing on the cake.

With an hour left before Alistair had to leave, we squeezed the Devils Kitchen. Thanks to Dave and Sue Walsh who let me push in front of them.

All in all, a good day at the office and maybe the last for some time. Well at least this office.

The amount of ice in Idwal is more than I have ever seen and there were a whole bunch of locals out today making the most of it.

Pictures of Bottom pitch ( All pictures taken by Mike Raine )

Baggy in yellow and Alistair in Blue 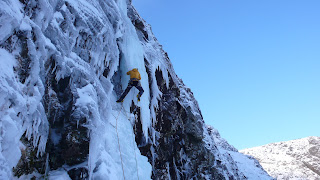 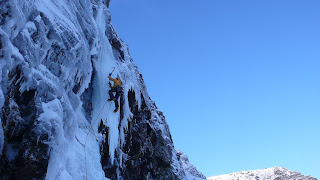 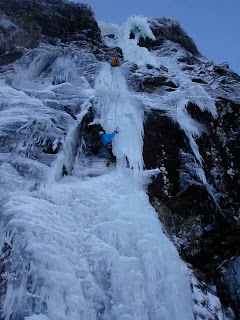 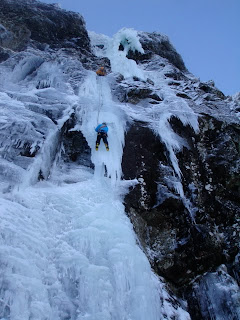 Maria - A little Gem of a route which no one does for years, then half of Wales does in a week. Nice one. Tim Jepson, Chris Hooper and Owen Hayward felt they too just had to get in one more route today before the forcasted thaw arrived. Having successfully negotiated lethal black ice on the A5 (which caused at least two crashes) they were rewarded not only by Maria in excellent condition but by an inversion which left the Carneddau bathed in pink morning sunshine, above a valley full of cloud. Route climbed, they abbed from the tree belay and went back to work. Excellent! 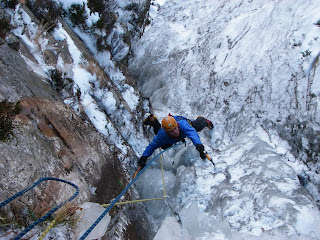 2 Avalanches In Snowdonia recently . Quite big ones, worth having a look at links, not seen these for some years in N Wales. Enough to do harm or even worse.

Worth considering with the amount of snow we have, and if a thaw sets in

There was a full depth avalanche on the Nant Peris side of Y Garn last night, as rapidly rising temperatures take hold.
The crown wall of the slope that released was over a metre high, and the debris spread a long way down the mountainside. With the last few weeks being a winter mountaineer's dream, the next few days look like being a soggy nightmare, with rain forecast in Snowdonia over the weekend.

Maybe it will go cold again, but for the time being, it would not be surprising if there were more avalanches in Snowdonia.

On Monday, after anther cracking day on the Black Ladders James and I cocked up massively. He left a DMM Rebel Ice too and I left a brand new pair of BD poles, by our car in Gerlan. As soon as we realised we drove straight back someone had already picked them up.

If the person who found them reads this can we please have out gear back?

We'll each buy you a pint or two in return!