Jon and Callum give it large in the Kitchen

Seems like these conditions are going to give us a fair share of rare routes being in condition. Jon Ratcliffe and Callun Muskett climb new routes in Kitchen

Jon Ratcliffe , did a new route on the left wall of the kitchen today ( Monday ) 'before' work (only about 4 hours late..!) with Panton and Andy Scott, bit of a classic to say the least! Twas one of those good days indeed... beautiful morning with alpen glow and squeeky snow, good company and awesome climbing.....30 minutes from the road, as Jon said who needs Scotland?!

There is a good chance this has been repeated by the time you read this, as a team went out this morning.

In addition to this Callum Muskett climbed a new route in their also last Friday ( New Years Day ) and who thought the kitchen was climbed out !!

Callum climbed a new route in the kitchen on New Years Day.( We have been able to find no one who has climbed it before However !!) It climbs the narrow gully that leads to a chimney between 'Coldhouse Cracks' and the 'Devil's Kitchen'. He climbed this with Malcolm 'Mills' Davies and they both thought it was a good and fun mixed route the first pitch is around grade VI-VII and the second pitch is grade IV/V, these grades may be well out due to in Callums words "my limited experience and getting the fear on-sighting it " Nice to see some honesty kicking around .

I was in the kitchen on Friday and it looked like this route would have been quite hard. Not having the ice that seems the be there currently.

1. Grade VII- Climb the deceptively easy looking gully past a first steepening to a rest below the second steep section. Place a couple of reasonable wire runners in rickety flakes and make some steep moves about a metre right of the narrow chimney up steep turf to reach the easy angled upper gully, belay in the gully somewhere below the final chimney.
2. Grade IV/V- Plow through snow to the very back of the chimney and squirm up the icy pillar chimney'esque chimney with some gear provided from chockstones. Very fun!

Callum Muskett on First Pitch of Devils Child in both pictures 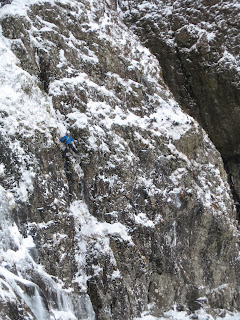 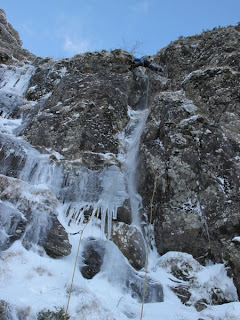 Had first my first day out winter climbing for five years yesterday and had a brilliant time. I dragged my Dad (who was sporting a pair of vintage axes from the 70's and wearing strap on crampons on a pair of walking boots) up Western Gully. It was in really good nick apart from maybe the 2nd pitch which seemed pretty gnarly for a 4. The direct third pitch was great. The right hand finish didn't look to be in condition. Top route - very varied.

We climbed Gallipoli Tuesday. Last 2 pitches in the dark due to a late start and getting the car stuck gave us a full on day!
Did he say how he found it yesterday by any chance? Id say, well, it was interesting!! but its only my second route on the Ladders, so they could all be interesting!!

The Devils Pipes is in now in, best to take a belay below the main ice fall and do that in a oner, a great, under valued pitch, awesome position. Thin ice backed up with rock gear, say about VI, 5 when in a thin state perhaps??(should be thicker now)
Posted by Mark Baggy Richards at 21:31