More and more routes and ladders back in action

Another fantastic day in the Park. Very cold and clear blue skies. I was on sledging duty again, another school shut again. Anyway more interesting things.

Good beta from Stu regards ladders as its unsure how much snow there has been in there. Looks like the mystique surrounding this route over the last how many years has disappeared. VII-7 having regular ascents in Wales, Bring it on.

Anyway I am sure Lee and Stu should be out rescuing cats and helping the elderly ??? seems like my taxes are paying for them going climbing of late

We ve been on your Ladders today, (sorry we didnt ask!) We made a careful approach to Western Gully area where actually the slopes were quite good (Friday). Under the Pinnacle Face the slopes look loaded, though there were climbers enjoying themselves over there.Lots of spindrift avalanches going off down Western Gully. We managed Flanders, pretty exciting and just keeps on coming, but reasonable pro. In all a long, great route! Weve never had hot aches so frequently in Wales! Get in! 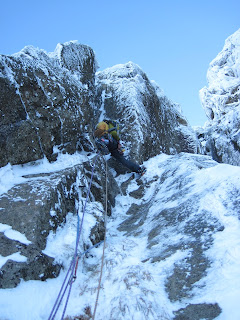 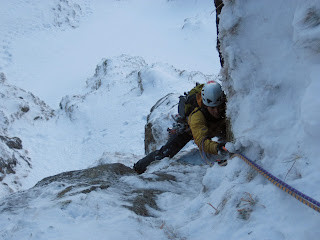 Lee with proper Welsh hot aches, so much harsher than their Scottish counterparts! 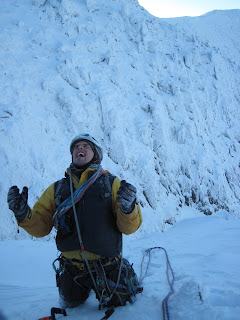 Adam Wainwright and Streaky climbed Bracket Gully on Lliwedd. This is a summer route and first climbed by Dia Lampard back in 86 !!!! about V-5 in current conditions. This may be the second ascent. Lot of soft snow on the terraces and in the gullies on Lliwedd.

Idwal was well busy again today so take care with flying debris over the weekend. Someone tried the Appendix but it seemed very un-stable and scary to watch. An Old man had to be rescued in idwal today off a route. Sting in interesting nick about VI at the mo.

Routes on North side of the pass not in nick

Baggy,
I was up on The Cascade today at around 12:00 and a party arrived when we were starting the second pitch. The route is in good condition, a bit thin but as libby said, the placements are all good. You don't need to run the first two pitches together, the belay after the first pitch is good long screws. Take a lot of stubbies with you, the second pitch is a bit thin on protection.
All in all a great route, couldn't believe there was no one else there.
Andy Woolston and Stu Harth
Cascade on Friday 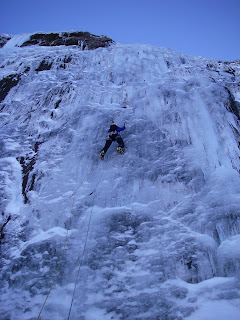 Central Icefall is to fragile. Pass well quite over recent days maybe the masses are in Idwal ? Lots of waiting for routes in idwal, can only be worse this weekend. Read info on snow conditions on Snowdon at end of report.
Face route is in good nick also.

Huw Gilbert as been out over in mid wales and found some ice. However, there is not as much as in the North of the park. 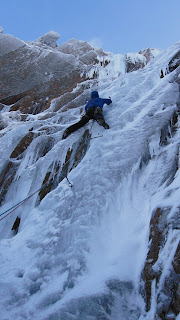 Still mega down here. Gwth IV,5 has been today's route of choice, 7 pitches long all but 2 of them on ice. Team Corris had a pair on Central Gully III,4 as well. They whinged a little about deep snow but it wasn't that bad. We're off on another jolly boys outing tomorrow to check out the Dinas Mawddwy water falls, don't know how frozen they are yet. Trojan not in as of yet though.

check out more from Hugh from Today
Hi Baggy,


(friday) Started on Sargeant's Gully (Cryn Las), was much wetter and thiner than I'd hoped for, lots of big holes through to the stream, still climbable though. Then round past Clogwyn Y Person where I dug a quick pit before crossing a big NNE facing snow slope to find there is still a real weakness in the snowpack. A top layer of powder over a mid layer of soft but bonded snow which released very easily from the few inches of neve beneath. At the edge of the slope where I tested it was only about 12 -16 inches deep in all but transferring that weakness to the areas of deeper snow was enough for me to do some detours.

To avoid the snow gullies I climbed an unnamed (in WWC anyway) ice fall to the left of Fantail Gully, a full pitch of continuous, leftward-trending, slabby II/III ice then a narrow, shallow gully above (mixed) where you can bridge to avoid tricky steps or loose snow. This leads to a long snow slope (solid this time) which takes you to the East end of Crib Y Ddysgl. I'm sure this will have been climbed many times before but I thought I'd mention it as the book doesn't and it would make an excellent line at its grade when the snow is in condition.

Descent via Crib Goch, which is stunning at the moment and pretty empty as the Pen y Pass car park was closed. N.B all the cars parked on the road there were getting tickets.

Thursday 7th - Cadair Idris - Trojan - got up 25m but bailed due to a low volume and quality of ice. Its not thick enough to take screws (its a while off that currently).

This time last week, Tim Neil, Jon Ratcliff and Lee Roberts went for a trip up to Llech Ddu. They climbed West End as it it described in the winter guide. However it says its unclimbed. Well Steve Long and myself climbed it back in 2006 and called it Y Front and gave it VI-6. Tim approached it by the L/H side on an ice fringe. Steve and I approached from the R/H side.

Jon on first pitch of Y Front aka West End 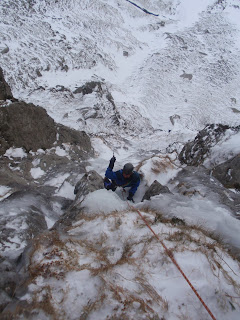 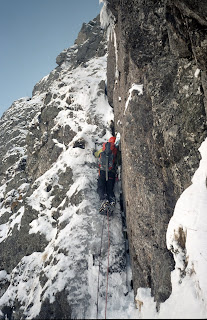 Lee then bailed up Skid Row until it got really poky , not quite in nick and getting dark. time for reverse thrusters. 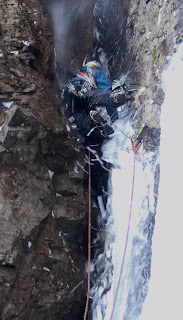 Just had a lovely morning up the ridge right of Cyrn Las then over the top of Garnedd Ugain and down the PYG track. Lots of snow about and strong NE wind blowing it about. There are large areas of windslab. I dug a couple of pits, the first one was near the bottom of the zig zags on a SE slope at roughly 900m.

I didn't do a full profile, but just a couple of quick stability tests. The first was a 'burp' test of the top foot or so of snow and this showed a couple of layers of instability (at about 50mm depth and 120mm depth from the surface), both of which slid after a firm slap on the bottom of the shovel. Both these layers slid on a clear graupel layer (polystyrene ball snow). I also did a shovel sheer test which went at about 300mm (1 foot) deep on a graupel layer again, with a moderate pull. So there are multiple layers of windslab separated by thin layers of graupel. On steeper slopes these conditions could definitely cause an avalanche, with the extra loading of a walker/climber or skier.

I dug another pit on the lower slopes of the Trinity Face on a NE facing slope and there was an older layer of windslab on top of a load of graupel. There was no clear result on the burp test, but almost the full depth of the area dug (only about 500mm) went with a gentle pull near the ground, on a layer of graupel, during a shovel shear test. There was also some avalanche debris a bit higher up the slope in roughly the area of Laddies Gully (maybe from last weekend's avalanche?, not sure where it was). Because this area does not get any sun at this time of year the snow pack is changing very little and the instabilities will remain for a long time. The top slopes of Central Trinity in particular look like they are composed of windslab, probably sitting on graupel. Personally I wouldn't go near them for a while.


Hopefully I am out on sat and at a party sat eve, so no update until Sunday HAVE A GOOD WEEKEND FOLKS
Posted by Mark Baggy Richards at 18:58