Gloggy got a little hammering along the way

Cloggy is a strange crag, in that it is not often in good nick when other crags are. However, this winter it allowed climbers in.

Whilst Wales was under is's magical, Tim Neil, alongside a range of partners made numerous trips up to Cloggy. In doing so, 2nd ascents, new routes and classics were climbed, making it the most productive season on Cloggy for some years.

First off, with Ray Wood, Tim climbed, ( which we think is the second ascent ) Route 68. This was first climbed by Mick Fowler back and Paul Ramsden in 2005 and they gave it V. This year, the boys thought that was a very traditional grade.
.
Route 66

Next up, with lots of other crag approaches being wade fest, Tim took the Cloggy option again. Finding a nicely trampled Snowdon path led to the split, then a short effort into the cliff.
From here Chris Parkin and Tim started via pitch one of Route 68. Where it steps left into the steep left facing groove, they went straight up a steep right facing one to a big ledge with handy spike. Next pitch took the big corner above, moving left through roofs at the top.
This new route was named Route 66, VI,6, good gear and steep.
Not content and needing to get off, they moved right and did Camus,V, ( another Fowler route ) which made a great combo.
From here a quick descent down bomber snow and ice via Eastern Terrace.

That day, NO ONE ELSE on the crag and people enjoying skiing down the Llanberis path 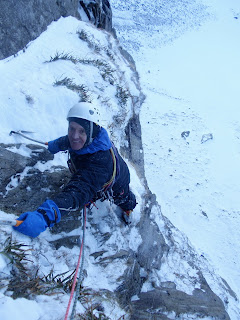 A route with a historical background and one which has seen many a good climber back off due to poor conditions and hard mixed climbing.

Tim teamed up with Chris Forest and they found good conditions and a route with quality and hard climbing. The route had quite a few ascents after this, then it all went warm

Chris Forest starting up Pitch 3. This is where often there is not enough ice to allow one to get up to the higher mixed section. 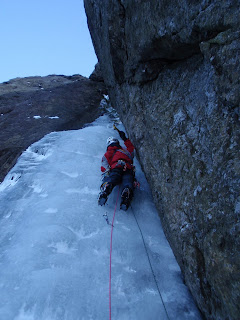 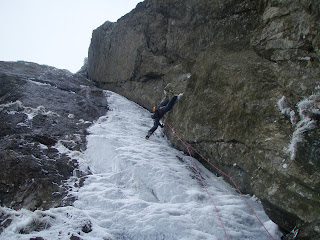 The amazing thing regards this route was that Tut Braithwaite Soled it !!! in 1982, not a bad day out, oh yes he also nipped into the pass after this route and soled Central Gully V and Crown of Thorns IV

No report on Cloggy would be worth its salt, if Jubilee Climb was not mentioned. A route which which oozes quality in every mixed sense and one which is good value for its V grade.
This pictures shows Libby Peter on the 3rd pitch ( depending on how you pitch it ) being belayed by Olly Sanders who gave it 4 stars .
Looking for " more excitement and deciding what use is a guide book " as Olly put it, a possible new variation finish might have been climbed that day. 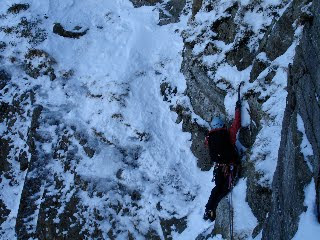 So Cloggy gave up some of it's treasures but it was short lived
Posted by Mark Baggy Richards at 21:38