3 New Routes on the Ladders

Over the weekend Tim and I put up a new route called Poppies VI-6. This gives a great route with 5 pitches 4,5,6,6,4. The route fills in ground between Western Gully and Birdsong.

With the crag bathed in clear skies we went to investigate the possibility of a new route to the left of Birdsong. Whilst Tim was grabbing the 2nd ascent of Birdsong the week before, he had spied a few lines out left which Adam and Dave had initially considered.

Overall, we were unsure of the outcome, but without a good look you never know. Our thoughts were focused on 1 main area of the the crag, this was around the 3rd pitch of Birdsong. Once we arrived here having climbed 2 new pitches Tim snuck off on a traverse leftwards and disappeared around the corner, this proving the key to the route. Once out of sight Tim climbed another turf groove having to excavate turf threads as the bulldogs were back in Bethesda!!! At least these gave some mental focus for the awarked moves up to the belay

Leaving the belay from the 3rd Pitch I moved right into a groove and followed this for 6ms. After sometime excavating gear on the way up the groove, the turf ran out and I was in plant territory . Time to come back down. Back level with the belay I moved further right into another groove and made progress upwards and then moved out right again to the base of another turfy groove. Now that my runners were over to my left by a few metres and level with me I was keen to get some gear. This I did level with my feet, then it was time to finish the pitch which required me to do quite a few pulls over turfy bulges, thankfully on good turf. Arriving at a big ledge the route was in the bag, looking up it was clear it was just grade IV above. Job done.

Topping out and walking back down with the sun setting producing a lovely orange sky topped the day off.

Start at foot of WG proper. Good spike belay 5m right and low. This means having climbed the grade III ground below as for WG

1. 60m IV - Step into WG Gully then, out right onto short steep wall leading to a right trending ramp. Good spikes at its top protect a swing right into top of 1st pitch of Birdsong. Share its spike belay.

2. 35m V - Step left slightly, and with a steep start, gain a groove leading to another good spike below a big left facing corner. Shared with Birdsong.

3. 40m VI-6 Step up onto a turfy traverse leading leftwards to the arête and very good protection. Step down a bit to traverse along a lucky flake to a steep turfy groove above Western Gully. Have it up this to an airy Armchair stance on a big flake on its left edge.

4. 40m VI-6 Stride off the flake into another groove on the right. This splits immediately. Take the right fork to a ledge up and right. This is below and right of the capping roof, and an obvious perched block. Step right across a ledge to its end. Then climb into a steep bulgy turfy groove which leads, with immense exposure to a big terrace.

5. 80m IV- Climb just left of the crest of the tower above to easy ground.

Tim at after stance after pitch 3 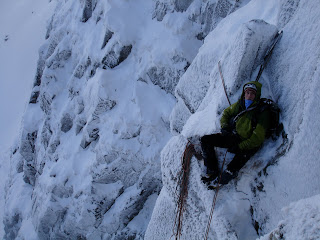 Tim nearing the belay on pitch 4 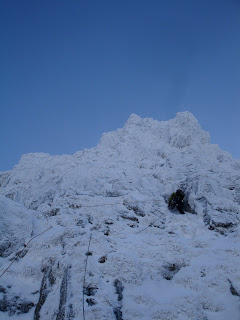 In addition to this, Chris Parkin was at it again. Not content with 1 new route he went back the next day and bagged another. Chris is Mr Black Ladders, having added many new routes on the Ladders since the early 90,s with many of these only receiving 2nd ascents since last year.

Worth bearing mind that these routes ranged form V- VII with lots at VI-6. How many climbers were putting up new routes at VI and above 13 years ago ?

Also Chris has dug out details of another new route he climbed around 2000. Krithia V.

A good mountaineering route with hard to find pro and some short hard sections low down. Situated on the central buttress, taking the right edge of the shallow buttress to the left of the central snowfields of Passendale. Start from the snow terrace below the upper cliff, 25m right of the snows highest point, as for Passendale. Belay below a short left facing square corner.

1. 40m 6, Poorly protected in the lower section but good pro before the hard ‘V’ groove. From the belay step up onto the crest on the right as for Passendale, up then right, and left aiming for an open ‘V’ groove at 25m. Climb the groove 4m, with difficulty; pass a short wide crack up to large flake belay.

2. 40m 5, Move right 2m to a hanging line of turf up a rib. Climb this exiting right on to easier ground after 8m. Follow this rightwards 4m towards the central snowfield until an open groove line above leads to an overhang where awkward moves left allow access to steadier ground and a belay on the left below right facing corner.

3. 47m 4. Climb the corner to its top, exit left and up in to another right facing corner directly below a distinct prominent hanging detached pinnacle/tower containing a chimney/offwidth (visible from the base of the crag). Belay on a large spike on the right, just before angle eases (a longer rope would allow a belay above).

4. 40m 4. Continue up to below the distinct pinnacle and sneak left around its base to a short corner in the gulley where Broken Cease Fire finishes, which leads to easier ground.
5. 90m 1/2. Easier ground leads to a narrow ridge above Western Gully and the summit plateau.

A mixed route with; ice, turf and rock route to the left of Gallipoli starting from high in Central Gully. Start 20m below Central Gully chock-stones at an ice smear on the right wall.

1. 45m 5
Climb the Ice streak to where it ends and move right on turf and iced rock to good gear in block. Back left on turf to thin exit onto easier ground and up to base of a large block. Travers beneath this and climb up and leftwards to a belay ledge overlooking CG at the foot of a short sharp rib.

2. 35m 4
Climb the left side of the rib for 30m to a short off-width formed by a large flake. Climb this to a belay on large spikes.

3. 35m 4
From the top left spike climb the short wall using the narrow turf line to a large ‘walkway’ ledge below a 2nd rib. Climb the left side of this up cracks and past spikes to top the rib.

4. 20m 2
Up easy ground and exit via a crack in the right wall of a diagonal slot to complete the technical climbing.

Krithia – V 5 Chris Parkin & Richard Townsend circa 2000
A direct start to Gallipoli, which meets it by the large flake on the traverse pitch.
Start 20m left of the normal start higher up CG at the first line of weakness beyond the area of steep compact rock.

The main pitch was technical 6 with poorly developed ice on the left wall. Traversed onto this with slight aid from in situ tat, then freaked out because of the state of the ice – managed to carry on regardless (and protectionless) to finish the pitch. The ice was actually better than it looked, but with hindsight we probably should have stayed in the chimney. Very cold with massive powder snow on approach and descent.