I went and climbed Maria on Gallt Yr Ogof with Tim and Libby today. Given IV in Cold Climbs and V in the winter book this route has not been climbed for some years I believe ?? . It is one of those routes I have had on my list for some time, I suppose due to it being in Cold Climbs and hardly there. Friday I went to have a look at this climb from the A5 and thought is was not quite there. How wrong I was, so thanks goes to Martin Chester, Steve Long and Jony G who went in there Friday and found it in nick and letting us know. Two teams were on it when we left today so not so rare anymore.

Overall it may warrant V in its current condition as the first pitch feels quite necky. 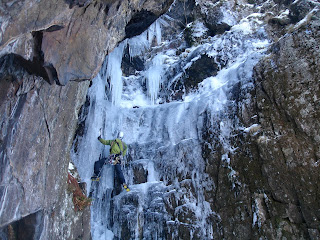 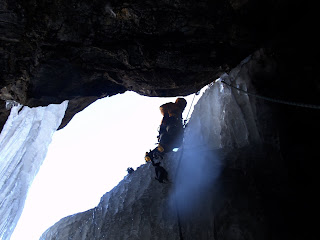 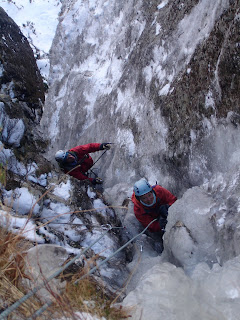 A new route on Llech Ddu has been done Blackourt VII-7. So many hard routes being put up and winter is just starting. I am sure more hard routes will be done over the weekend

I Skied into Llech Ddu Friday with Dave Almond and climbed a new route. Blackout. VII 8. Based roughly on the summer route Blitzkrieg in the lower section, but where that route goes left into the big corner we continued straight up, to the Pillar Traverse, then climbed two more pitches up grooves and steep slabs in the dark. A pretty intense day on a serious bit of rock!

Out with Jim Potter today in Cwm Hetiau and did The Irish Mail (IV), fab route! The Railway Gully (II/III) also looks in good nick and so does The Flying Scotsman (IV, 5). Only saw 2 other climbers, who were walking in whilst we were on the route! Got to say it was fairly chilly in the wind today but another beautiful day in paradise...

Finally full story on the rescue in Idwal on Friday I reported.

Baggy, further to the brief reference in yesterday’s blog to the rescue of an old man in Cwm Idwal on Friday, I can confirm the details of this alarming story. Myself and Jon Ratcliffe were enjoying the steep and funky ice route, The Sting, when we noticed an ageing hippy character soloing up Stingray, a grade IV/V route to the left. Realising that this had a steep and tricky exit I was intrigued as to how this mystery character would cope with such territory. Either he was some veteran superstar nonchalantly cruising around his old stomping grounds, or he was insane escapee from a local old people’s home – at this stage it was hard to tell?

I watched him move sloth-like up the lower easy angled grooves of the route, pausing at mid height to take photos of Jon who was close to the top of The Sting. Jon topped out, but our silent visitor seemed to be stuck, his nervous twitchy moves indicating that an impasse had been reached. A brief shuffling down-climb preceded another lengthy halt when it dawned on me that he had reached another impasse below him and was now marooned halfway up the ice fall.

At this point he turned to me and started gesturing wildly, flapping his arms around like a drunk air traffic controller. The wind had picked up, but amidst the flapping of my hood I could just about make out his muffled cries. “Help, help…I’m stuck! Get me a top rope now, or I’m doomed! I’ll pay good money if you rescue me. Help, help!”

Realising the urgency of the situation, and how his destiny now lay in our hands, I tore back my hood and shouted up to Jon to pull one of the ropes through and drop a rescue rope to the stranded and increasingly frantic old hippy.

With a rope tied round his waist he then sketched his way to the top of the groove in the style of what can only be described as an anxious turtle shuffling up a beach.

Upon reaching the top, imagine our surprise when we discovered that the poor hapless fool that we had rescued turned out to be none other than the esteemed climbing fashion guru.

When asked what had brought him to this sorry, low point where he was begging for top ropes from strangers, the climber became quite tearful as he told us the tale of how he had lost his infamous ‘white trousers’ and thus - much like mythic hero Samson, who was powerless without his long hair – his 'mojo'.

He stumbled away into the mist, muttering something about how “Nobody makes white winter climbing pants these days” and how he would “have to get hold of some of those trendy, low slung”, and crucially, “white snowboarding kecks from his son” and lastly, rather ominously, that he would make sure that our “kind deed was repaid in full”.

Everybody should keep their eyes peeled for the ‘Great White Trouser Wearer’ – he’s out there in the hills of North Wales , although with all the snow he may be hard to spot.

Ground Up Productions Ltd
Posted by Mark Baggy Richards at 16:10