No not this month, but at the end of September, the temps went crazy and what good timing that proved. I had planned a circumnavigation of the Isle of Wight, with Roger, a good friend of mine, back in April this year. However, we both thought we would be battling with the weather not lapping up the sun.

Struggling with an ankle injury this year, which has stopped me climbing since January, I have spent a lot of time sea kayaking. This has proved much entertainment, big water and a variety of trips to Mid/South Wales. It has also allowed me to spend time with Adam Harmer who is always up for a laugh and time at Summit to Sea Shop run by Pete Barr, This shop is Wales leading sea / kayak shop alongside being a climbing shop. It is found at Valley on Angelsey in North Wales. Time spent with Pete is never dull, the only time I went out with him on the water, this year, ended up,  with us calling the coastguard out, at night, to rescue a drunk hanging precariously to the edge of North Stack. Mind you Pete bagged the souvenir, the empty bottle of bells.

Roger and I left North Wales on the 26th Sep under blue skies and that is how it stayed until our arrival back in North Wales 4 days later.

Leaving Key Haven on the morning of the 27th Sep,  we paddled out and down to the famous Needles and associated lighthouse on the S/W tip of the Island.  Our visit here proved very pleasant and calm, which is often not the case, 5 hours after leaving the Needles and stopping off at Freshwater bay we pulled up on the beach below Blackgang Chine.

This was a cracking night to spend on the beach,  it was so warm and the sunset was an added bonus. Sleeping in our bags was not an option. So the first day, 35km, we spent against a headwind and the tide. Not ideal but this would allow us the use the wind and tide on day 2 to our advantage.

Leaving a 6.00am the next morning to gain the tide,  found us paddling into the sunrise and paddling in our t shirts !!. Pulling up at Bembridge just before 9.00 allowed us to bask in the sun and visit the cafe for scones , cake and coffee. !!!  Good excuse to re fuel.

Next stop,  was just west of Cowes,  after dodging ferries, a variety of boats and a few hovercraft. The tide was pushing us along quite nicely and we decided that Key Haven and the finish to the trip was in order.

Back in Key Haven for 4.00pm, the trip was in the bag, the tan was topped, the cakes were old energy and the pub was calling. 75km done on day 2 , a small goal was ticked and added to the list. Its just all the trips and routes on the list which are not ticked are the problem. 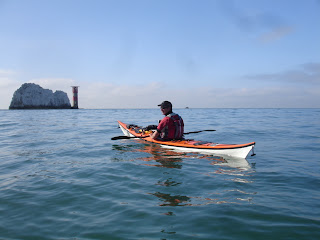 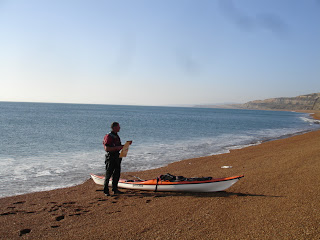 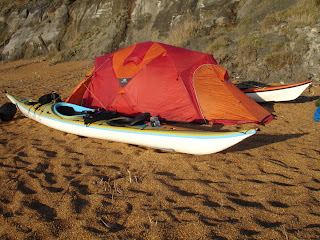 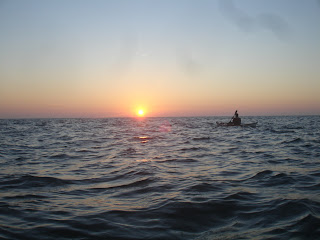 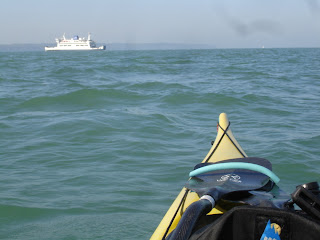 Posted by Mark Baggy Richards at 23:02 No comments: