Did you Know Bono came to Wales for the action

Looking at the forecast as no doubt many of you have been doing, it does not look promising for next week. A few cold spells but they seem short lived.

As expected, there is still quite a lot of snow on the hills. Lets hope some of this stays around long enough, to give some good easy gully climbing once it goes cold again.

I will be away working for a week, so no blog updates until next weekend at the earliest, lets face it we all need a break. Well I do !

Thanks for all the beta, etc, since I started the blog back up for this winter back ( at the end of November 09 ) . Its the reports which help make the blog so useful. I for one, did not imagine I would have to work this hard so soon. But hey, its been fantastic.

Who would have thought that N Wales would have undergone its craziest period for new routes and repeats for many years. It has been a stonker. There is so much to look back on, just where do you start.

This pic is for Jonny and Jamie

Its hard to imagine this is North Wales 45 mins from the road. 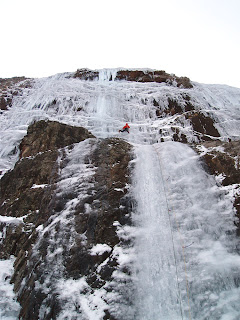 Here, Tim is climbing the main pitch of Back in Black ( Monday 11th Jan 010 ) . This is found on Equator Walls in the Pass-Grade ? some say V-6 this year, some say VI-6, that was last year as the ice was much thinner and less of it. Anyway does not matter that much, this is a great 55m pitch with a ab point at the top. Quality. After this Tim blasted around into Cwm Hetiau and ticked a load of the classic ice routes off. Not a bad back garden to have.

Mr Welsh Winter Wiki
The first ascent of the route above was done by Pete Harrison in Jan 09. Pete is currently Mr Welsh Winter Wiki. Without his enthusiasm for the Wiki and the info he is using to put topos together, all would be lost. Pete is laid up with an injury this winter. Keep up the good work Pete

You may remember? I reported this dramatic event some weeks ago and Simon Panton gave a full account on this Blog. The person in question turned out to be the ‘Great White Trouser Wearer’ – Well he was out there again in these damm god hills of North Wales last week and I am very pleased to say was back to his finer form. All thoughts of that day were a distant memory and chatting to his partners that day, they both seemed to be in awe of him. The persona that was oozing from him could be felt vibrating around the cwm. We are all allowed our off days and by the look of one of his partners, the one in the balaclava maybe it was his turn.


Bono
On hearing how good conditions were in North Wales, Bono , decided to sample for himself what all the fuss was about.


Finally
This person needs to be found, captured and escorted of the hill in winter. If you do see him, approach with caution, be nice and mutter words such as moss, dirt, scrappy rock, gogarth, loose shite and he will become accommodating to your wishes 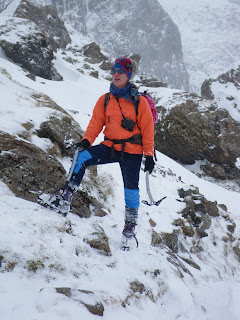 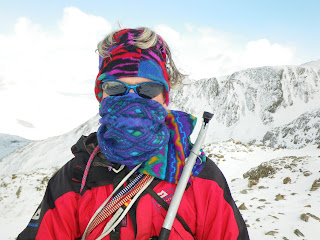 Posted by Mark Baggy Richards at 20:55