1 ) Anyone who has put a new route up , can you get the details on the Winter Wiki.

2 ) Currently, whilst conditions are so good, I have decided just to post new routes or rare ascents.

Cheers for all your help

These new routes keep coming and the ladders is having a battering this year. Flanders, hardly anyone had done this last year, now its a classic and now its nearly been climbed true summer line. Chris,s routes are now well known, but no can keep up with him as he keeps adding more.

Also Mr Parkin cannot drag himself away from his crag, the ladders. Back again with Steve Long for another new route.

Simon Frost and myself finally managed to get up the summer line of Flanders (Black Ladders) on Sunday.

Well not strictly true, we did most of the summer line but took a slight deviation on the fifth pitch trending a little further right from the belay overlooking Western Gully up some turf ledges and regained the summer line at the next belay.

The line and pitches were great each giving interest and with a character all of their own. “The Citadel” but in North Wales was mentioned.

Over all we think its worth about VII 8, but the crux pitch is bold and 50ft lobs can and have been taken if you mess it up. 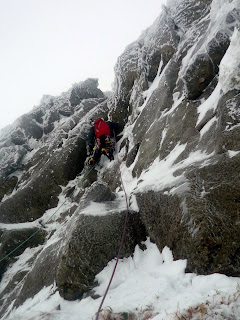 Had a good week last week which started with Steve Mayers and myself putting up a new route on Tryfan which is a better start to Green Gully and went at about V. I also did The Devil’s Cellar (with the direct start) and found the top pitch to be in very different condition from last year and is more in keeping to a IV than the steep narrow pitch that was there last winter. We were out again yesterday expecting to encounter some crowds but we didn’t have a problem getting on any of the routes we wanted to do and found South Gully (IV) in fantastic condition as was The Devil’s Kitchen but I would say it is more a V in its present condition. 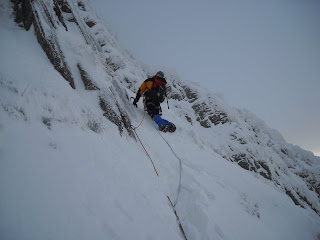 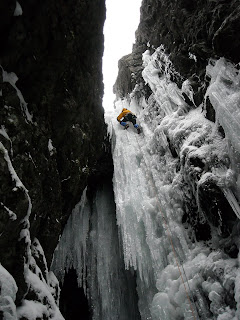 Climbed Pipes and Screen – (I recon we should start up a Café Called ‘Baggy’s Butties’ just below the entrance the kitchen, we’d of made a killing yesterday). Also, the start of the Pipes –starting to look a little chopped up.

Alistair on start of pipes 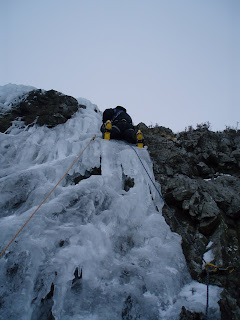 In an attempt to avoid the weekend rush, Tim Jepson, Dodi Palmer and Dave Williams went up to the Carnedd y Filiast slabs and did 'The Ribbon' as per the old guidebook. The ribbon of ice is in good nick, varying between one and eight metres wide, thick enough to take screws in places, but otherwise devoid of runners or meaningful stances. The whole route is 300m long, of which approx. 200m is ice, at a constant easy angle, and the rest straightforward snow. The old guidebook gives it Grade 4, on account of the lack of protection. Technically there is nothing above Grade 2, a good candidate for a long, mountain solo! While there is plenty of scope for aimless exploration on this crag, the two routes described in the guidebook look as if they are the only ones worthy of any attention.

Dodi Palmer climbing the narrow section of 'The Ribbon' 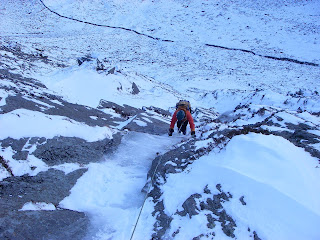 Idwal lob!!!!
.
Witnessed a guy lob off The Ramp at Devils Kitchen. He was soloing between 4 other teams. He fell about 10M before getting entangled in another teams rope, preventing him falling to the bottom of the route.
Lucky sod.

Pics off adrian trendall off the APPENDIX over weekend- Unknown Climber 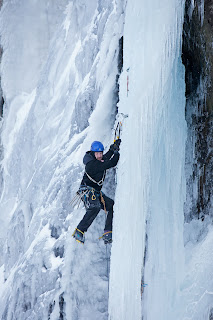 FINALLY AS CONS ARE SO GOOD FOR THE TIME BEING PLEASE JUST SEND INFO OF NEW ROUTES AND RARE ASCENTS OF ROUTES. KEEP ON HAVING IT FOLKS
Posted by Mark Baggy Richards at 17:51