Where did it all come from from !

Last Tuesday it was quite warm and we had very little snow. Fast forward 4 days and we have some great climbing conditions. With things coming in so quick and being so close to Xmas, I imagine for many ? it is the wrong time of year to get out, being tied up with the festive season. Lets hope it stays around after Xmas. If it does ? and we have the cycles then we will have some top conditions.

I was surprised to see how empty Ogwen Cottage car park was at 8.00am this morning and it looked like it had had not been mega busy all day. Maybe that was a reflection of it being Xmas day in 5 days time.

I was out with Toby Keep today and we first opted for a new line with the outcome being unsure as the crux looked like it was at the top and it looked steep.
Toby led the first pitch ( 30ms 4-5 ) with me taking the next pitch ( 30ms 5-5) The climbing was interesting, slabby at times, good gear and fairly technical.What more could you ask for.
Once we were both at the 2nd belay it was decide to rap off. The crux pitch even though it was V short, was either to hard, we were too weak, not fit enough or maybe all three. Anyway it looked to have v little gear so that was our excuse. That is the way it goes the first two pitches were really good and it will still be there either for us when we are fitter or when we have a rope gun in tow ( Pete get fixed ! ) 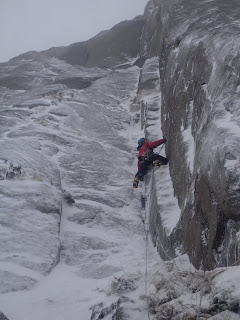 Me on second pitch 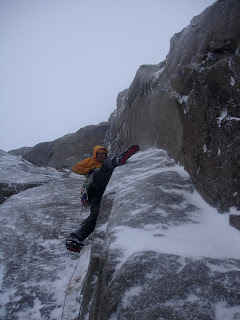 We then decided to drop on to Glyder Fawr main Cliff as this has turf and drainage. The crag is in great condition and all the winter routes in the winter guide are climbable. Yes lacking a build up of snow and neve but all the routes can be climbed without this. The turf is bomber, and any ice is tops, first time placements and screws will go in as the pictures show below.
With time short we opted for Twisting Gully and lapped up the turf, rock and good ice. This went in 1 easy pitch (2) a good short ice pitch ( 3) then some really nice mixed ground for a rope length ( 2/3 ) After this there still was a good 100ms of 1/2 mixed ground with ice streaks. This was a great 3 star route on a failry big Welsh Cliff. Get it done 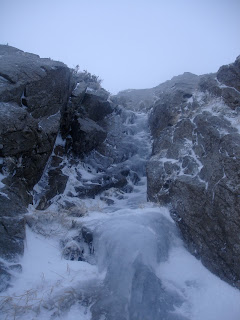 Cloggy : Rob from Joe Browns went up Cloggy to find the turf not that great. That would have surprised me today as I would have thought Jubille Climb would have been in for example.

Over the weekend routes such as Idwal Stream, Ramp and the Screen have been climbed. It looks like other routes are forming and South Gully will be climbable soon. Thanks for Matt Sutton and Gerwyn Lloyd for this info, they climbed the screen on Saturday saying it was in quite good nick.

No pics as I was soloing today, but up in Cwm Cneifion from about 8 this morning. I heard you were up there somewhere but vis. was pretty bad so I hardly saw anyone climbing except a pair on El Mancho at dawn when it was still clear.

Generally nasty with powder snow over rock, started on direct line to Hidden Gully but turf was a bit borderline so I went up the scree of Easy Gully to it instead, Hidden Gully was surprisingly nice when you get in there, a couple of (small) patches of old snow, enough ice and the odd thin patch to make it interesting, turf was much better, I guess it gets wetter in there. No cornice.

Then Tower Slabs which had ice all the way and the turf was solid, it could do with getter colder but I felt it was good enough to solo.

Finally Idwall Stream which I had passed off as being too wet and warm but saw lots of people on it from a distance so I gave it a go. It was more like canyoning then ice climbing with water gushing out everywhere, and a wetsuit would have helped but there was enough ice to get all the way up.

Hope that is of some use, I'll remember the camera next time... 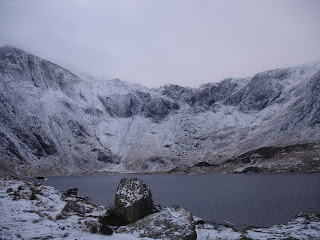 Rob Jonson with Phil Benbow was on Sergants today in the pass saying it was a bit wet in places but still a good day out.

South Wales is also in great nick in places. Chris Guest making the most of conditions and with his report

Just a quick on with some photos with some ice from near Fan Hir in the Black Mountains. The top of this fall is about 450m. As you can see it is not fully formed but good fun none the less as long as you are not too heavy footed!!!!

The fall near Storey Arms is just about in and getting fatter and will only get better. Torpantau will be in to. So there is plenty about for South Wales ice Jedis. I've got my eye on some new lines just needs a couple more days of cold. 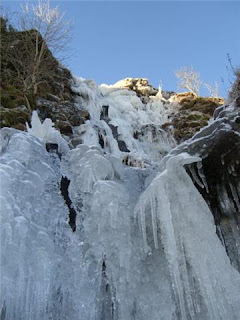 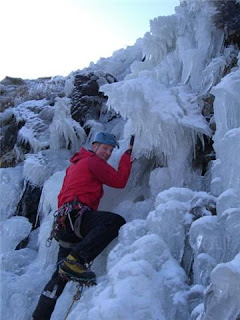 So the motto is get out if you can.

I am also invloved in the Xmas Season and will not be out on Monday and other days this week.
Posted by Mark Baggy Richards at 18:26

Ohhh you snakes. On bady watch here in Sheffield!

Did you mean Baby Watch ? Baggy