The major news this week is of Adam Wainwright and Dave Hesleden stealing a new line on the Ladders. They climbed this in mint weather and it comes in at VII-7 and is called Birdsong. Top effort lads this is a major addition to the North Wales scence. Please go to this link where you can read a report from Adam ( Thanks to Ray Wood and DMM ) I will post more pictures of Birdsong on Wednesday . Seems like the Ladders is becoming a re-found classic crag.

Today, Tim Neil, Stu Mac and myself went back into the Ladders. This crag seems to have some kind of draw currently on Tim and I. With a nice head wind on the walk in, low cloud, lots of spindrift etc etc we found we had the crag to ourselves. We choose to climb Pyramid Buttress. Given grade IV in the guide it may have felt a litte harder at times, but it gave a cracking outing with all the usual ingredient's of turf, grass, rock and ice and spindrift.

With 7 pitches of climbing, the first three being IV-V, the rest a mixture of 3 with the odd step of IV it provides an interesting outing up the crag. It has a right to left rising traverse on the first two pitches with pitch 3 giving a horizontal traverse with plenty of space below your feet with the odd runner. Not a place to take a wobbly second. The rest of the pitches see you wandering up the left arete of Central Gully with lots of short steps on good rock and turf. Topping out in the cloud and wind was a total contrast to yesterday. 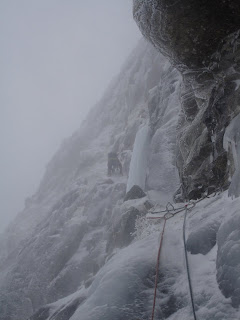 Baggy on the traverse of the Sods 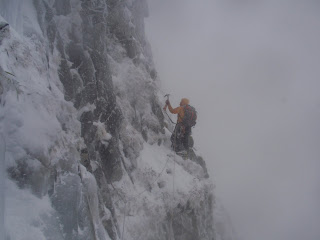 Just the two of us and along came Dark Vader

Tim Jepson reports that the weather was perfect and the winter conditions excellent in Cwm Cneifion, despite the fact that the major icefalls are still lean or non-existent. All the Grade 1,2 and 3s got multiple ascents, but with almost everything in condition there was plenty to go at and no queueing. Owen Hayward and Tim Jepson decided it was high time that they stepped up a gear and moved into the modern era with an ascent of the superbly sustained El Mancho (although Tim still insists on using his 30-year old ClogVulture) and they then followed Crispin Waddy and partner up the totally contrasting Pillar Chimney, which was an exquisite thrutch on hooks and armbars. No other teams on Clogwyn Du today and the views from the top unforgettable. A wonderful day, despite the treacherous descent down the verglassed Idwal path at dusk.

Tim might have a Vulture , but it looks like Owen has got some relics as well. Nice one boys, grade VII next when you get new tools and go leash-less. Strap it on. Apparently between there 4 axes spans just over 100 years of age !!!

Tim Jepson belaying Owen Hayward on the third and final pitch of El Mancho VI-6. Owen is entering the V groove which many consider to be the crux. However, some feel the crux is higher up once over the small roof. 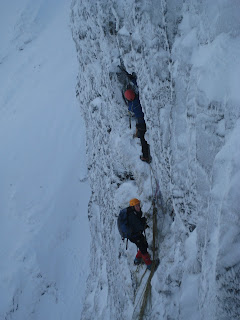 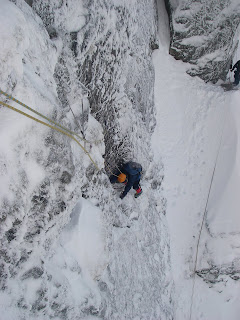 Owen in Chimney on Pillar Chimney 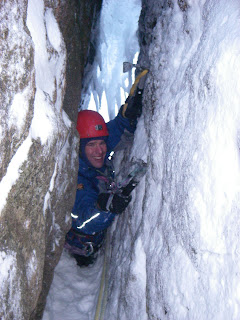 Climbed on black ladders yesterday ( Monday ) Western Gully (direct) which was in great condition. Slightly damp on the snow ramps but the ice and mixed climbing was brill ! . topped out at 5pm and watched the helicopter rescue on the North ridge of Tryfan (hope nobody was seriously hurt!)

Went climbing on Clogwyn Du with Crispin Waddy yesterday (Mon). Climbed Pillar chimney, We then climbed the gully line on the left of the crag between Hidden Gully and The Crack, starting about 15m or so left of The Crack. Climbed this in two pitches, the first with good ice into the gully proper. Second pitch ended with a short overhanging wall, which involved a couple of steep moves on bomber hooks followed by a tenuous top-out move onto the powder snow slope above. Any idea what this route is? Dosen't seem to be any info in the current guide, or the more recent topos.

Hi Dave, I have tried it twice, both times in out of nick cons and backed off. I have not found anyone who has climbed it
( maybe someone as ? ) Anyway, I would name it and grade it and we can get it on the topo . I say we, I mean Pete Harrison who is doing a topo for this crag. ( Cheers Baggy )


Route Dave and Crispin are referring to above 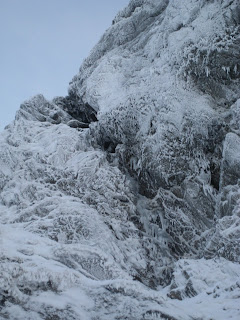 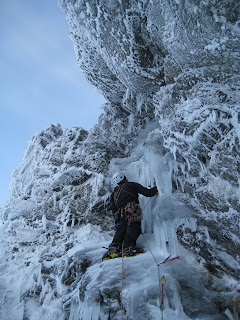 Posted by Mark Baggy Richards at 17:32