Its a Mega Mega Post, the biggest, its nails, its IX-9 and its in Wales.

Andy Turner one of Mountain Equipments pro partners and leading winter activist has made the long awaited second ascent of Cracking Up on Glogwyn Ddu yesterday. First climbed in 2006, by one of the UKs leading lights, of current times, Nick Bullock, this route comes in at IX-9. Yep folks grade 9.

Andy attempted the route on Tuesday but after having a hook explode called it a day as the weather was quite mixed, but did Wednesday produce the weather, oh boy it did. Blue skies, light winds and cold.

Having spoke to Andy last evening he was obviously well pleased and chuffed that this was in the bag, even more so as his winter is just starting. Andy said that sleep was a little broken the previous night and that the walk in seemed longer. Not sure about Andy feeling a tad aprehensive, I was on edge all day waiting for the outcome.

This is an outstanding piece of climbing from Andy who climbed the route free, with it only being the start of the season with only a few routes under his belt this year. With a Scottish season ahead I would say watch this space.

On the whole, Team Mountain Equipment have given their brand a very nice Xmas present. With Andy's fine ascent of Cracking Up, seconded by Stu Mac Aleese, both ME pro partners , alongside Baggy, Tim, Phil and Dave who are supported by ME, the brand has nailed the Welsh Winter Scence of late.

The other breaking news is that Ian Parnell and Rich Cross were in town. Where ? the same crag as Andy and what route ? Would you believe it Travesty another of Nick's Routes awaiting a second ascent. Travesty comes in at VII-8. Knowing that Ian was keen for this last year added to the suspense on Wednesday. Ian put in some gritty determination and 'power screaming' to get him across the difficult first pitch after a couple of falls - one of which ended with him suspended from his elastic leash with the tool out of reach while holding the other one between his teeth! Full report on Ian's blog

In a joking manner Nick informed Tim Neil some months back " They are all Scared" Well not any more Nick. Apparentley when Nick heard he said it was his Chritmas and birthday present all in one day.
Two major second ascents of Wales hardest winter routes on the same day. Who would have thought that.

Other news which seems a litte more mondane compared to the above is that there have been other rare ascents of routes. On Tuesday Phil Dowthwaite and Baggy climbed Cannon Rib on the Black Ladders. The crag is in brill nick and has to be one of the best winter crags in the UK. The route follows the summer line of Cannon Rib which is HVS 5a . The winter route is given VI-7, we thought more VI-6. The route shares the first two pitches of Polar Bear VI-6 then breaks out L for another 2 pitches. It gives 4 really good pitches mainly on turf blobs, grass and the odd bit of rock. 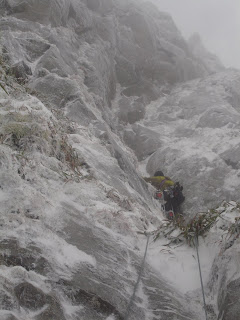 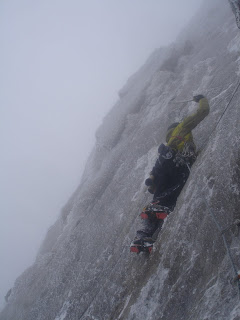 The same day Tim Neil and Dave Rudkin climbed Flanders, again on the Ladders. This is also HVS 5a in summer. This recieved a few ascents last year and is all ready becoming a classic with all parties priasing the climbing and position. It comes in at VII-7. Dave and Tim were back on the ladders Wednesday to claim thier ascent of Cannon Rib as were Chris Parkin, Gaz Davies and Greg Cain. Three ascents in two days of a route that has probaly not been climbed for years. Quality. 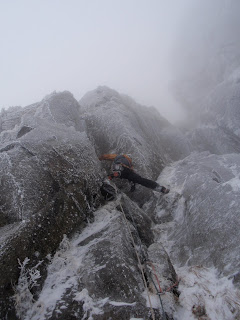 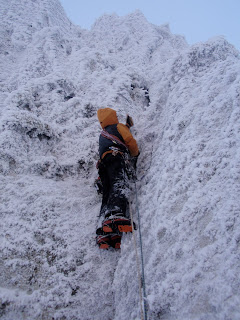 Flanders as from Cannon Rib. It follows the rib to the left of the gully ( Western Gully ) 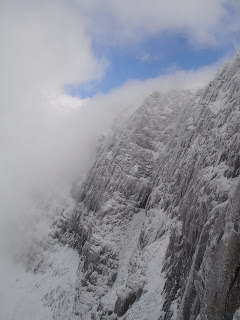 Other news is of the Devils Pipes
Hi Baggy,

Mills and I climbed 'The Devils Pipes' today. Quite thin and bold (grade VII/VI?), passed Nick Dixon on the way down who seemed to think it was a rare ascent? We also climbed 'Stingray' which is in stonking condition. Most ice climbs are being done at Ogwen with the exception of 'the appendix', 'the curtain' and 'the sting'.

All the best, Calum 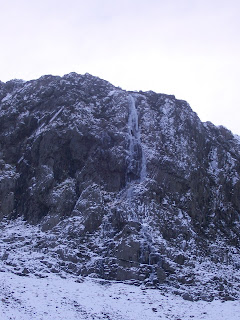 Today I climbed Idwal Stream and The Ramp with Iwan. It was Iwan's first time on ice and he moved quikly and throughly enjoyed it. Can we climb steeper ice please next time. Another convert.

Iwan on the Ramp 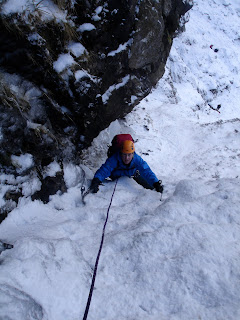 Olly Sanders has been out yet again, this time with another paddler Roger Chandler. They went and climbed Devils Cellar. This route is on the R/H side of Idwal and is another classic ice line. The right hand start is at V-5 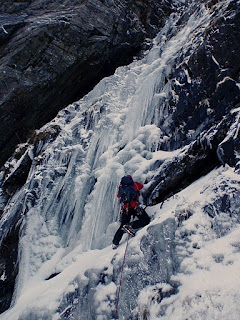 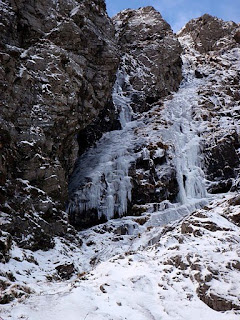 Managed an ascent of The Ramp (III) in Cwm Cau on Cader today(Thursday) with fellow Corris climber Pete Rigby. We got up it but the ice wasn't much good. It was there but you had to be pretty careful with it. We made up for it with a couple of mixed pitches of brutal thugery which gained access to an upper gully. This finished close to the summit. It could be a great route but not today, still fun though. The air feels warmer down here now so I doubt anything will be in nick for a while.

Good to see you on the hill! I ended up having a great day out. There can't be many places where
You can laze around in bed till 10 do some last minute
Christmas shopping, have a late big breakfast, then head off for
the hill, enjoy some socialising on the way while taking in a few
routes (The Stream, South Gully ***! and The Ramp!)and be back
For a Christmas Eve dinner. A great Idwal day. Have a good C
hristmas.
Best wishes Matt
Posted by Mark Baggy Richards at 22:50

Hi Bags, your nice pic of the Ladders is actually of Pyramid Buttress left of Central Gully.
Also, if you left a very handy axe, 2ft from the top of the 2nd pitch of Flanders, please contact me via Baggy. It's in very good nick, but the handle is too small for my big farmer boy hands! You were so close!!
Tim

The recent trips up Flanders ..have they all been the winter line?

or is the summer line this years winter?

I lost my axes on the summer line last year and I am wondering where one the route Tim found one insitue and where about the winter line crosses the summer...

you really couldnt make that stuff up could you.

Keep up the good work

nice one Tim ..I think it might be mine ..was it on the summer line ..left of the big flake belay ?

did you manage that pitch ..?

shocked it was still there if it was mine ..I had placed it in a nubbin of moss and was moving up with my hand when my foot popped.

I have emailed Baggy

Hi Baggy, glad you boys are having it while i sit in the rain in France... Not frustrated at all!

just to clear something up, it was not me saying all you boys were scared to try my routes, it was Ian Parnel. I would never had said such an uncouth thing!

And in your report you got the grade of travesty wrong, it isnt VII/8, its VI/7...of course... Ian was just having a bad day. I wonder why captain keen tim neill hasnt done it yet... or, anyone else come to think of it?...

happy new year to you all..xxx