Another day in paradise another possible 2nd ascent

Seems like my mate Tim Neil is gunning for my title of Mr Keen this year. Whilst I am away and embroiled in Xmas duties he has been out again today, this time with Rob from Joe Browns. What he needs, is his wife to a have a baby, that will slow him down !!!!

Tim and Rob on top of Ladders today 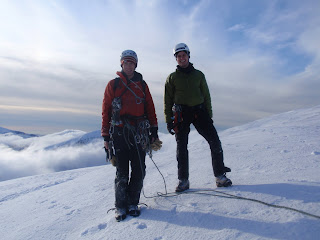 Black Ladders busy today. Lots of teams on Eastern and Icefall gullies. Libby, Gary and Greg cruised up Pyramid gully. Team on Pyramid Buttress also. Adam and Dave exploring exciting new ground.... Me and Rob did Imminent Conflict VI-5/6, another one of Parkins routes from the 90,s. the man did so many . ( This may be the second ascent Tim ? nice one lads )

Seems like most of the Ladders is in nick, good ice all over crag even at the lower tier. Rock on folks to one of the best winter crags in UK.

Rob in the upper easier chimneys on Imm. Conflict 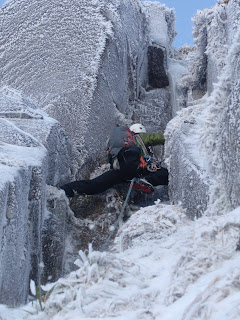 Hi Mark,
Climbed Clogwyn Du Gully LH Branch on Christmas eve with my girlfriend. Thought the main pitch (2?) was great, top end V 6 mixed into a very thin ice traverse to join the main flow. At the time we climbed it there was substantially less ice present on that pitch than is visible in the photo in the latest pdf download for the crag. It looks like this pitch will take some time to fully form.

On another note, I fixed a nut and thread as an anchor (with maillon) above El Mancho’s top out. Hopefully none removes it. From that (red cord) you can get down to the ramp on the lower part of pillar chimney on 60's. From there you can downclimb relatively easily or make another ab from a spike.

Fancy going off the beaten track then read on

Just a quick email to let you know about my esoteric winter mountaineering day out. Pinnacle Gully (II) on Craig Yr Ysfa, a great line, but snow was hard work in places, although there was plenty of it and vegetation is not that frozen (does vertical heather freeze?!) the gully did focus the concentration with 3 'interesting' steps. Then onto Ffynnon Llyffant (Snowdonia's highest Cwm?) to do Central Gully (I) in near perfect snow conditions. Topping out in sunshine onto the summit of Carnedd Llewelyn and on the descent glimpsing a Brocken Spectre. A beautiful day in Snowdonia and a great way to work off the excesses of Christmas, avoiding the crowds of the usual winter climbing haunts... 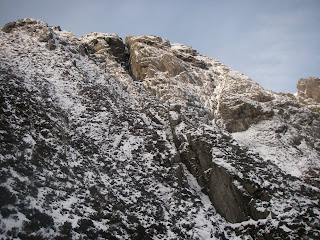 I've never seen so many people climbing in North Wales before. Cwm Glas and Snowdon gave fairly good climbing today. The snow is far from perfect but was solid enough where it needed to be. Not much ice around though, the little ice pitch into Sinister Gully hasn't formed but the left hand alternative has good snow. Cave Gully is climbable but the steep section is a bit lean. Surprisingly there is also a lot of rock showing through on the narrows of Central Trinity. Right Hand Trinity was by far the best route of the day with pretty good conditions throughout. It was very busy though. Have a look at the lads in the photo, having a whale of a time but the barrage of junk being kicked down the route has clearly left it's mark on the guy on the right.

Pics from Huw on Snowdon today 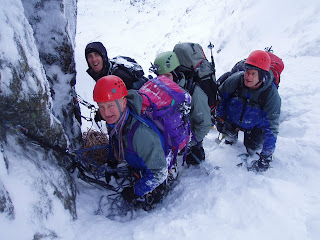 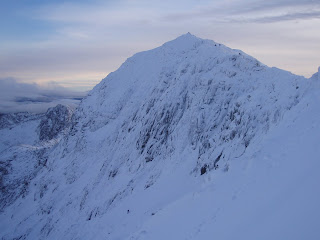 Posted by Mark Baggy Richards at 18:54