The BUZZ is Back in Town

It is truly back, that buzz in North Wales, everyone wishes to have a piece of the action. Si Panton texted me to say his team may have done first winter ascents of rock routes and some new routes. When I get more I will share. There are quite a few folk who have some big ideas over the next few days so if they happen it will be good, but who knows.

Where was I today. Not on the hill as it happens as I am juggling at the mo. I managed to get plumbing and chippy work done on my new kitchen and go xmas shopping with my girls. With the kitchen needing to be finished by 5.00pm on Xmas eve then I am under pressure with these conditions around. A late night working on the kitchen was had last night after being on the hill. However, looking at the mountains from Bangor today drove me a little mental, so I decided the girls needed to go to the climbing wall, of which they loved, alongside me getting some bouldering in.

Greg Cain and Jon went and sampled the delights of Twisting Gully on Glyder Fawr saying how good a route it was.

Great job on the winter blog front, thought I'd help out a bit and let you know what John Tatam and I got up to today...

Early start to go and have a look at Clogwyn Ddu Left Hand Branch; pretty much devoid of ice which was a bit of a surprise... So we went up Tower Slabs, which was a good mountaineering trip with good ice at the start of the route. Next up a swift walk around to Glyder Fawr Upper Cliff; we climbed East Gully, a short ice pitch, some mixed action and frozen turf (a typical Welsh Winter gully!). Then it was over to Clogwyn Y Geifr to do The Screen (would recommend short ice screws until it fattens up a bit more) and The Ramp.

There is a lot of graupel about, like walking on ball-bearings! A fair amount of water running on 'ice' routes towards the end of the afternoon as temperatures rose.

Whilst out and about, Idwal Stream received at least one ascent, there was another pair heading for Twisting Gully on Glyder Fawr Upper Cliff and a pair heading into the Devil's Kitchen. 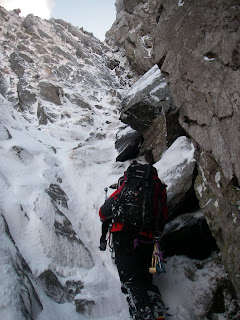 Photos attached (feel free to bung them up if you think they are worth it):

Huw Gilbert as sent info from the Soth

Took these today on Aran Benllyn. I couldn't find anyone to climb with so thought I'd take the opportunity to take a look at somewhere new. The guide book has describes the crag (which is huge) as more of a water ice venue and suggests that firm snow or good neve fairly forms, that was certainly the case today. I rambled up Winding Gully (II) which leads nicely into East Gully (II/III). It was by no means a continuous line of ice but I'd say on balance that there was more ice than snow. Given that the total length of the climb is 300m it was still worth the long walk in. I'm afraid that the photos don't offer any scale but the ice fall shown is 30m high! It was in good shape but the prospect of never being found if I fell off it prompted me to stick to the original line. If you're eagle eyed you can spot the top of it just up and right of centre in the crag photo. The ice visible towards the top right of the same photo is the line that Winding Gully takes to dodge the main fall.

Thanks and I'll try to keep you posted on developments in the deep south. 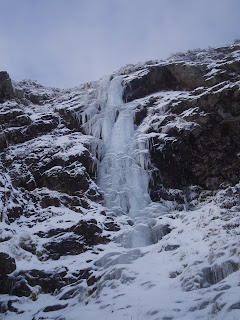 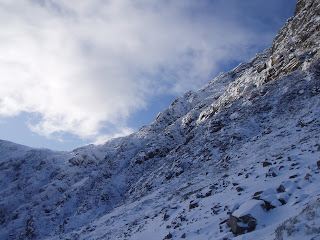 Posted by Mark Baggy Richards at 18:17