This took me by surprise I could say, but with Mr Parkin and Mr Benett   nothing really does where winter is concerned. Well done chaps.

It just goes to show if you keep an eye on the conditions, consider the aspect / altitutde and use the binos and scope then there is always something on offer.


The unsatiable Mr.Parkin, Mike Pyecroft, Rod White & myself headed to Ysgolion Duon today. We all headed up the easy approach to Central Gully.

By knowing the area very well we managed to rock hock up the lower  slopes, had    a devious means  to  circumnavigate  the crux (non-existent) icefall to firm  ground at 800m

From above the chockstone the neve, turf & rime were great. Mike & Rod tried to find July Crisis but I think ended up on something new, slightly to the left @ IV perhaps. Chris & I found a nice 2 pitch III/IV to their left. Short new routes  / alternative finishes to Central Gully perhaps? 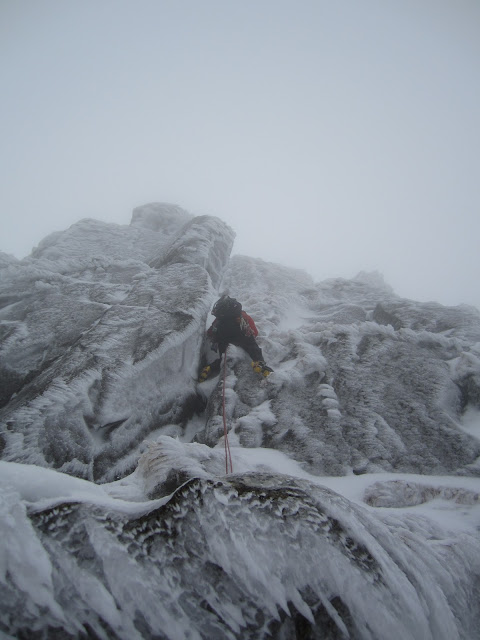 So a potential 2 new lines to the over expanding Ladders, 3 new lines on one day and its not even in stellar nick and its only the start of the season.

PS it was pretty grim up top (& down below for that matter!), another quality day in the hills!

Seems else where little was on  offer apart form the regular venues of late, Cwm Lloer, Nameless cwm.

The weather bagged out midday on Saturday, but the forecast still looks come come Monday

Ian Parnell  and John W did Mankini  last Thursday which was a  day of s!!! weather, so that must  have been fun. Good to see the Peak lads making a effort when they can to get over and contribute to the local scene.
Posted by Mark Baggy Richards at 17:05