Today has been beautiful.

No wind, clear skies and some climbing to be had.  With a hard frost overnight and temps staying below freezing high up, then no change in conditions from Monday.

I went up onto Trinty Face with an open mind. Even though we have some good bomber neve around reports of a mixed bag on some routes and the steeper routes needed to be listen too. 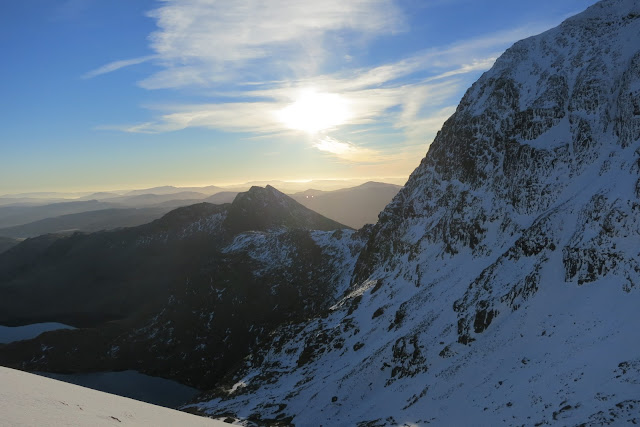 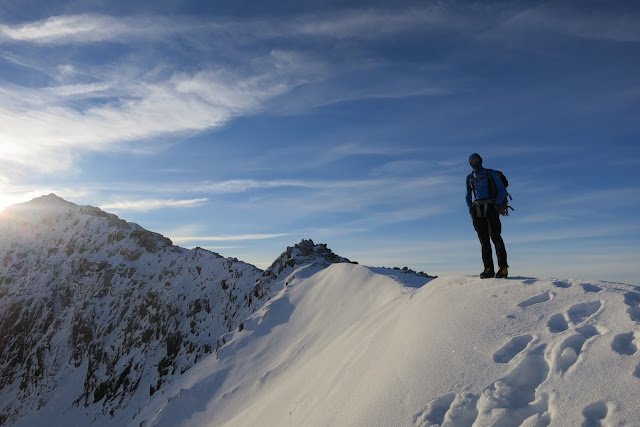 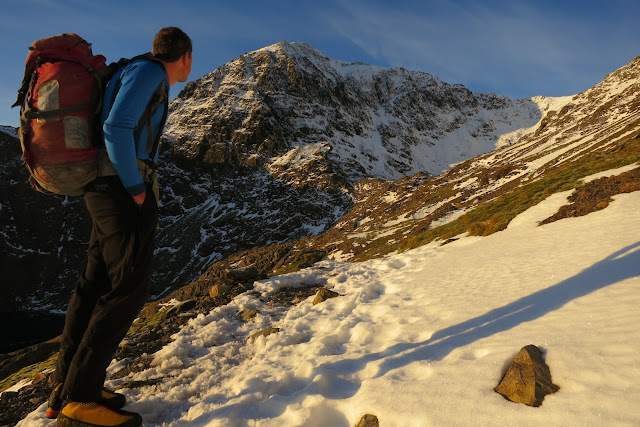 Lee and I started with the girdle of the Trinty Face.  This gave a nice outing on a mixture of snow/neve but never nothing to worry about ( for the grade III/IV climber )  for the first section into Central Trinity. The grade to there being about III , but bear in mind, your climbing sideways and on most pitches (50/60m ) you will have  2/3 runners as there is not much kit round. Belays are not that common ! So no place to be pushing your grade, taking a novice out or hoping you will be OK. The second needs to be as competent as the leader. 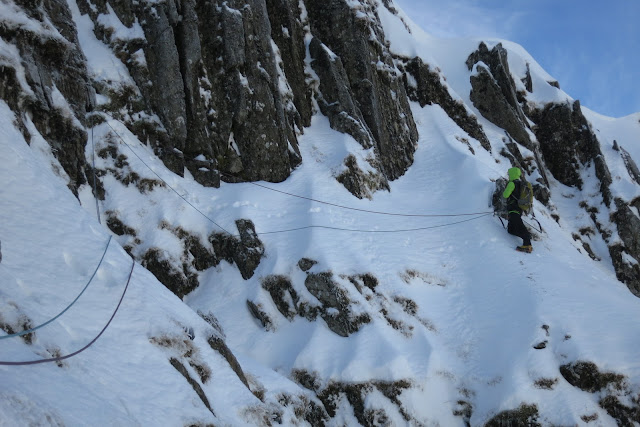 The section after Central Trinity gave a little more spice in particular a short traverse section on a small ledge ( mentioned in the guide ) Spicy grade III . Once here, this section was not really in great condition, so we crawled as much as we could on the ledge which had snow/neve on and used the 2 obvious nut placements. We avoided using a good lip for tool placements  higher up ( being 300mm in width ) as no snow and softer ground with a lot of vegetation around. It would be best avoiding this area at the moment as any placements are not going to do the surrounding vegetation much good.

After this we descended Central Trinity which is in good condition, as is Left hand Trinity.  Next we climbed Snowdrop IV in conditions I would describe as delicate. The neve/snow was there but you had to be careful, tactful and in no rush. Make sure your happy on grade 4 for this.  Variety of vegetation showing which was not frozen that well , but enough snow/neve  and odd bit of ice to avoid having to use any vegetation if you careful and happy on grade IV.

We look at  Mistaken Identity and decided not to climb this as we did not think it was in nick and not enough snow/neve on the route. Therefore we headed over to Snakebite Direct IV\3        We missed the first section on the main pitch due to what we decided was not the best conditions and followed others up Snakebite III  then joined our intended route. This again required a carful approach so as to use the snow/ice and neve rather than the vegetation showing.  This route ad few good runners.

The Spider and the Fly have good neve all over them. The rest of the crag has a mixture. There is good neve in many of the easier gullies but the stepper ground has many pockets of vegetation showing and crusty snow/ice some of which you just kick through.

Quite a few teams around on the easier routes and up upto IV and Sods Law ( new route after the guide came out V )  had an ascent in good conditions.  Great neve for walking and skills in the basin and on the zig zags and on the top.

One thing to remember on Snowdon there is not an abundant of quality turf/soil based turf. There is a lot of vegetation which is full of air and is not great for tools even when frozen so that is when more neve/snow ice is required.

Currently the face is not plastered with perfect  good snow ice/neve so you have to be careful not to hack at the vegetation, thus ripping it off.  Lots of discussion of late on the forums regards vegetation. My take on this is respect where we are , respect other concerned parties such as Counrty Side Council for Wales etc and take care. Do not let the enthusiasm take over, do an apprentice rather than getting straight on routes at your limit which are not in perfect nick. Just some thoughts, take them or leave them, no one is perfect,  use some common sense and hopefully we can help avoid issues shown in the picture below.

Belay on R/H Trinty today. I suppose as conditions are not really good then snow/ice anchors/belays are not there and maybe some climbers feel a little exposed as conditions are not really good. Sensible approach to get good belays.  But a possible result of this is hacked up areas. No big deal you may say, you may be correct.  We are all entitled to our opinion all I am doing is showing what the crag is like in parts. Climbers can make their own view.   Enjoy the conditions and weather on Wednesday and Thursday if you get out. 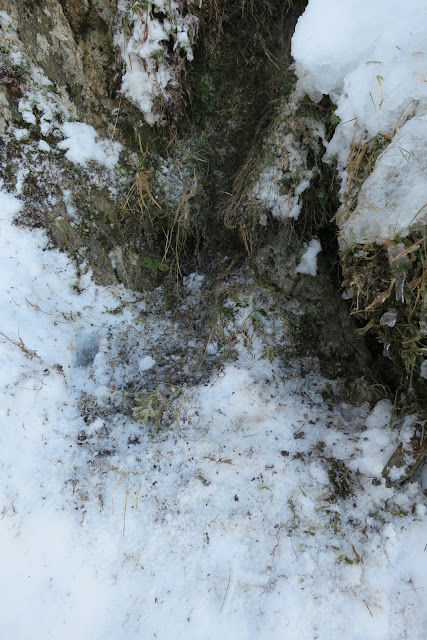 Top half of RH Trinty 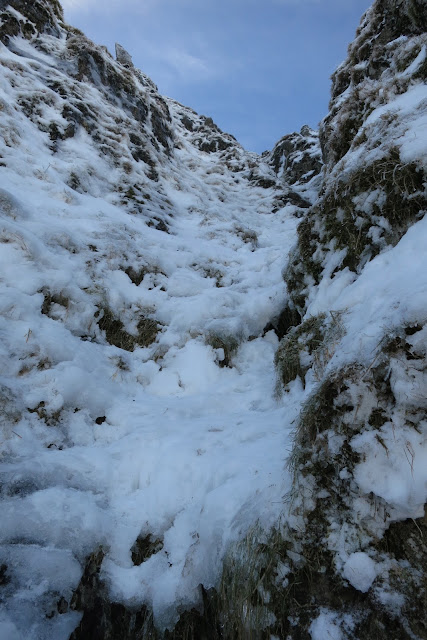 Posted by Mark Baggy Richards at 19:46