Its all shaping Up quite nice

As the whole world seems to be heading for the Black Ladders we went to Cloggy Sunday. Climbed Jubilee Climb with Ian Carr. Rock climbing, turf and plenty of snow clearing. No one else on the crag - a great day out. 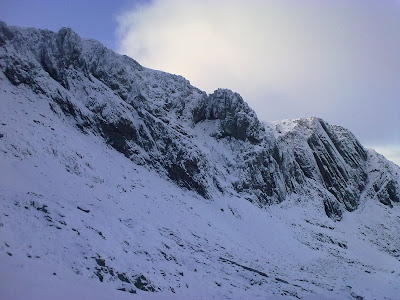 Myself and two friends went into the Black Ladders on saturday (parking in the village of course). We saw four other teams about with Dave Barker saying that Pyramid Gully was holding good ice but a wade at the top. Conditions were warm all day but still a lot of ice lower down on the right. We got on The Some (V5) but it didm not seem in nick


Sunday we headed up to Clogwyn Du and climbed a combination of Clogwyn Central, and the top of Clogwyn Righthand Branch. Lots of folk out as expected and felt alot colder but very little ice on the left wall of Clogwyn Left Branch making for an adventurous looking V6 rock route a team was battling on.

Hi Baggy, up in the kitchen today. Superb and busy ice everywhere. Tim

Two teams did Central Icefall Direct today, Matt Stygall and Adam Hughes just pipping Steve Long and Tim Jepson to the first ascent of the season. ( Matt and Adam were off to Idwal at 12.15 having had coffee in the Caban ) Although the temperature appeared to stay below freezing all day, there was quite a lot of water running behind the ice, and especially down the icicle, which combined with thin, brittle and hollow sections made for a steep and scary expedition. Interestingly, Cascade, whch normally forms before Central Icefall Direct would have been unclimbable today - just not enough build up to justify an ascent. 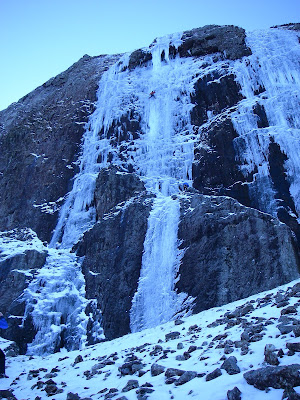 Posted by Mark Baggy Richards at 19:27