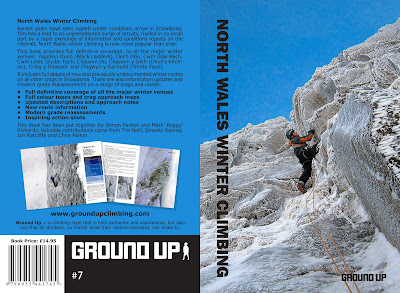 Its new, its upto date, you need one, get one.

Simon Panton (Ground Up guidebooks) and Mark ‘Baggy’ Richards (the man behind the popular North Wales winter blog: wwwbaggy.blogspot.com) are the co-authors of this exciting and bang upto date interim guide. In addition to this, valuable contributions have come from Tim Neil, Streaky Desroy, Owen Hayward, Rich Stone and Chris Parkin ( aka Mr Ladders )

Recent years have seen superb winter conditions arrive in Snowdonia. This has lead to an unprecedented surge of winter climbing activity, fuelled in no small part by a rapid exchange of information, topos and conditions reports on the Internet. North Wales winter climbing is now more popular than ever. If you didn’t manage to climb in the winter seasons of 2009 and 2010 you certainly missed out on some of the best conditions in decades and fine clssics

The conditions created in these past two seasons have created an unstoppable momentum and will be talked about for years to come. Many of the classic ice routes formed, some that had not been in nick for a very long time - Central Ice Fall Direct and Maria, to name a few.

Mixed routes began to become a normal part of Welsh winter climbing, with many fine new additions and some classic repeats. One that needs mentioning is Andy Turners first free ascent of Cracking Up. This route high on Clogwyn Ddu, first put up by Nick Bullock comes in at a hefty grade IX9. Ray woods photo in Climber March 2010 makes you realise what a steep, strenuous and fine lead it was.

However, it was not all hard and new routes that were the focus of the past seasons. All the easy and mid grade classics were climbed on many occasions with all ability of climbers making use of these amazing conditions and enjoying the uniqueness of being in the hills in winter.

So, as this frenetic activity has triggered an explosion of new routes over recent years, plus a renewed focus upon the many neglected routes climbed since the old Welsh Winter Climbs guide was published in 1988, it became increasingly clear that a new winter guide was long overdue. And so the publication of the new North Wales Winter Climbing (Interim Guide) is both timely and a much needed guide.

It will hopefully inspire many more people to realise that Winter Climbing in North Wales is back with a vengeance and offers some of the most classic and inspiring winter routes to be found anywhere in the UK.

It is hoped the guide will be in North Wales climbing shops before Xmas, failing that Xmas hols/early Jan. From there it will be distributed nationally. The first outlet to purchase the guide will be V12 in Llanberis. Keep in touch with those guys for further updates.

Back to normal Biz

Been up to Cwm Glas on Sunday, fair bit of ice and neve high up. Parley Fern left hand was well iced as was fantail gully. Thought they were much more sporting under these conditions good II's. Face route was very fat but the bottom 10ft had fell off, a day or so frost should mean a turf start would gain the ice safely.

Simon Lake has been up on the ladders today, monday and had found superb conditions on Icefall Gully, good ice and neve.