Yes it is only snow, but that is the point I said to my five year old daughter, after explaining to her  I was not staying with her and my sister overnight.  They never really understand do they.

It was still 11.00pm and I was still in Liverpool doing the family thing. I had promised them Saturday was not for climbing, so managing to sneak the blog report in at 23.35 was a bonus. However, driving back to North Wales at 1.20am was not. The text from Andy saying an 8.15am start helped, no early start for us, so that meant I could get up at 7.00am get packed etc and be at Ogwen on time.

Ideally, going out on the Monday would have been the best plan, but the weather looked awful for then, so had to make the most of it and get my first day in of the season.

Venue was an easy choice for once and the plan of a few new routes was in mind. On approaching the crag it was good to see things in nick and that my initial plan was working out.

We managed two new routes with names yet to be given. In reference to the grades and more info visit Andy,s blog on this link  . Andy is being conservative with the grades. I suppose the difficulty is, the routes are not really long, they are well protected, but the crux pitches pack a punch with some quality moves. I was not able to repeat Andy's drop knee Egyptian move, I went for the lanky mans dyne technique.


Baggy seconding first pitch of one of the new routes 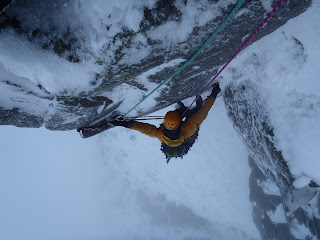 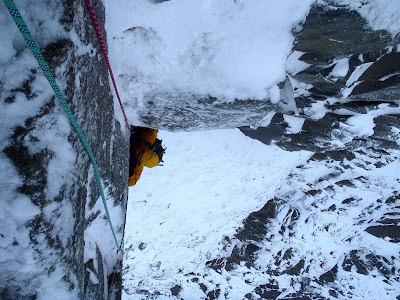 Andy climbing upto base of route, lots of snow and snow/ice in the gullies 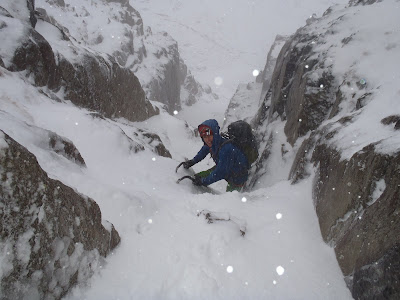 
See you're up to your usual tricks sneaking off to do new routes whilst no one else is looking!

Was up in the Lost Cwm yesterday ( Saturday 17th Dec ) with Jon Byrne, Louise Tully & Jim McKormack. Managed to put together a III but the turf's not frozen . Ice was not in large enough quantities to complete any of the established lines. Still it was out of the wind (but in the clag all day). Oh better not mention Jim being really hunt over.

Headed for Craig Dafydd with Mike Pyecroft today ( Sunday 18th dec ) and after struggling to see or find anything we did one of your routes Helmand Province; a good route with an excellent top pitch. Noddy & Andy Scott were on another of yours Mr.Ps....Said it was excellent.


Turf still isn't frozen, it's covered in heaps of insulating snow, but the mixed routes are in good condition otherwise. Well worth the slog up there.

See you out there


Chris Wood and I enjoyed ‘full conditions’ on Reade’s route yesterday – had to wade through thigh deep snow to get to the route and then excavate thick hoar to find runners and holds. A howling wind added to the excitement. We nearly turned back on the walk in due to soggy ground and slush but as soon as we got into Cwm Glas Bach it was full winter conditions. Suprisingly good adventure and no-one around. Shame it’s all going to go again now – fingers crossed for a frigid new year!

Well I know a few teams are heading out on Tuesday, but I am giving my body time to recover before my next hit. Injuries this year have meant very little climbing or days on the hill.

Posted by Mark Baggy Richards at 15:55