Today I teamed up with Adam Harmer. The forecast was due to be poor to start with, then improving later, so we had a late start at 10.30, which meant we missed all the rain. The weather cleared up nicely in the afternoon.

We went up and climbed Reades Route on Grib Goch ( HVD/S ) This provides 2 good pitches of climbing ( both at 30ms ) in particular the second pitch which has airy and steep climbing. It follows the summer route but combining the 2nd/3rd pitches. At V-6, this route provides much interest in particular the step off the pinnacle ( on the second pitch ) onto the steep wall and is well protected.

Near the top of the second pitch 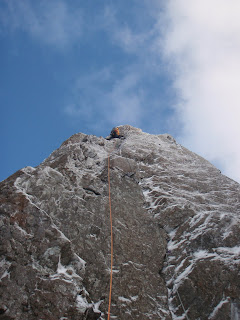 Adam steeping off the pinnacle, on the second pitch ( Photo Toby Keep ) 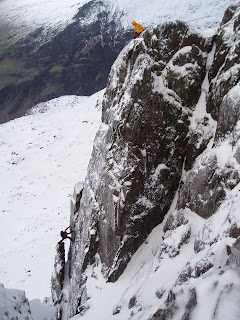 Adam on the first pitch 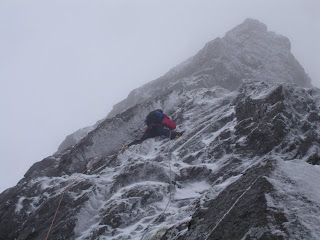 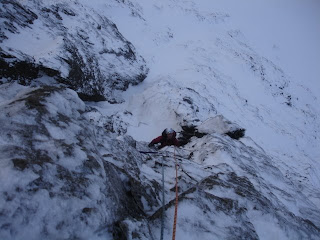 Originally the first winter ascent was done in mid 90,s by Dia Lampard and Dave Green with the second ascent by Owen Samuels and Matt Stygle some 10 years later in December 2008 ( unless someones knows otherwise ? ) Ours was the 3rd and I recommend this route in summer or winter.

There is a lot of snow up high and I would assume the easy grade 1/2 gullies would be climbable. The forecasts over the last few days, have kept changing in view of where freezing level is for the next week. Lets hope they are slightly wrong.


Adam crossing the Foxes path. As you can see a fair amount of snow 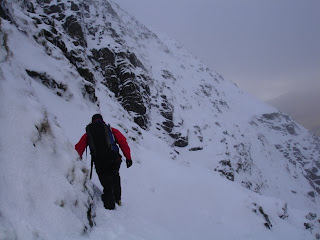 Snowdon ( Sunday afternoon ) showing how much snow there is up high 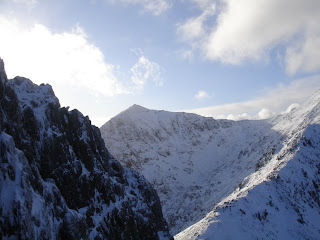 Posted by Mark Baggy Richards at 19:18

Baggy,
Any idea what conditions are like on Clogwyn Du & Ysgolion Duon?
Geoff B

Not sure if the turf will be froze. On Sunday any turf which was well covered by snow was soft on the way in . If it was partly covered it still was not really froze.

However easy gullies may be climb-able, but this forecast looks poor for next few days ie warm.

Sorry if this does not really help. If was going out it would be mixed routes which were only really rock.