Blue Peris leads again with another new route for Wales 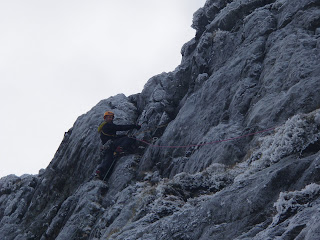 With Mark and Gaz fired up from yesterday ( Picture above - Mark on Blenderhead Wednesday ) it was back up to Glogwyn Ddu to see if the fuss over El Mancho was up to it. With the ever super keen and enthusiastic Dave Evans raving about this route last month one needs to be open mined ? Dave is so keen on everything, is it really that good ? Marks reply, thats one of the best routes in the UK I have ever done. Dave was right.
Not content with this and with no need to get back early today, Gaz and Mark spied what look like a new line. So upwards they went and another new route was in the bag, unless anyone knows otherwise ? This route follows the obvious arete to the right of Glogwyn Ddu Gully, seeking out all the hard climbing. Called The Rutt at VI-6/7. Another fine effort. I will be glad when Mark is back at work. Not sure why did I not see this ? Just goes to show the routes are out there if your keen ( Mark on crux of The Rutt ) 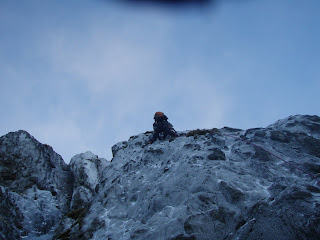 Guidebook guru, Si Panton, left the keyboard to gather dust today and was out in Idwal, enjoying the ice lines saying there was was plenty of routes to go at. So these should be in on Friday.

As reported Wednesday , Ian Parnell with Jon, who between them have been having some interesting and exciting trips up North of late, visited Glogwyn Ddu. They climbed El Mancho, saying that at VI,7 - being well protected, with good rests in between the hard bits is a *** route. So that is now all 7 ascents praising its status. Its a classic. They then went on to climb Blenderhead which after 10 years without an attempt has now received 4 within the last month. Ian seemed to think that VII,8 was appropriate which is what Big Tim Neil, Matt Stygle and Mark Walker thought. So not Wale's first grade VIII after all, but still a hard route for the time
( 1996 - 1998 ) and a fine effort from all. You can see a full report of these 2 routes on Ian,s Blog Jon on first pitch of El Mancho by Ian Parnell 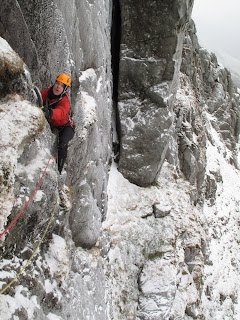 Posted by Mark Baggy Richards at 19:11