Its been winter today again

Today has seen N Wales bathed in blue skies. There was a frost this morning at my house, north facing and at 100ms. This evening on the way home, there was not a cloud in the sky, a full moon and it was cold. Arriving home at 6.00pm  it was -2 at the house.
2 handy teams went up to Cascade early this morning but reported running water and left it for another day. Would not surprise me if some ones try an ascent this evening as it gets colder. I am also sure there will be teams in Idwal tonight.
Berwyn went for another short trip into Idwal and reported good ice conditions on all the routes which have been in this week. Devils Cellar ( Berwyn on top pitch this morning ) having at least 6 teams on it today. He also said the thin covering of snow was still there at about 600ms 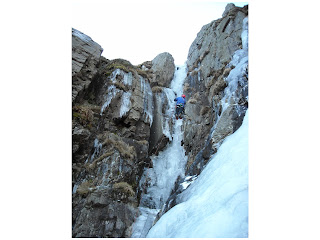 Mark has been having action with the white stuff again. However this time it was paint. Having a deadline on his house renovation has actually slowed him down.

The Met forecast for Saturday is windy, with freezing level around 700 rising throughout the day. However, that is a forecast.  I think it has not been 100% correct today. Also the local BBC forecast at 7.00 pm is saying frost overnight / morning and staying cold in morning. If I was you,  I would get up early and get out, that ice is not going to disappear that quick !
Ground up also have a report on the last few days
Have a good one
Posted by Mark Baggy Richards at 17:31

Mark,
Conditions excellent this morning in Cwm Idwal; beautiful plastic ice on Screen & Curtain, which was thicker than it looked from the descent path (thankfully. A few teams busy on Stream, more on the Screen more on the Cellar etc etc etc. Wind was beginning to blow up as we left at 12.

Lots of folk out by torchlight last night from what I hear!

RHS of Craig y Rhaeader was looking possible as we drove down the pass at noon.