Went up to Clogwyn y Garnedd on Sunday with Dafydd Davis and Streaky. Dafydd has been banging on to me about the chimney groove line in the left wall of Cave Gully for years (referred to as Gwyn Ein Byd on the wiki), so that was what I went for. Although looking fairly innocuous from below (don’t they all!) this gave a superb and sustained pitch, with an easy exit pitch leading up to the crag top above. We reckoned V 5 in moderrn Scottish grades and definitely a couple of stars - a great route in fact. Dafydd said there was an alternative exit out right at the top - easier, but bolder.

There is also another groove on the left wall a bit further up the gully, and a vague snaking groove on the right wall – Dafydd has done both of these previously and reckoned they were also good, if a little easier.

We then went for a look at Couloir, doing an entertaining little corner approach pitch on the left then doing another easy pitch swinging round into the main line, where Dafydd found a really crap belay about a third of the way up the groove. Streaky went to lead through up the middle section of the groove, but gave up after encountering a succession of poor/ripping turf placements, and of course, no runners. We then had a series of spooky down climbs with crap belays to perform to get off the crag. There was heavy snow during this period – must have been 2 – 3 inches.

Spoke to Miles Perkin this morning; he also did Gwyn Ein Byd on Saturday, and then did Cave Buttress which he said was gnarly and serious, and not really recommended. Mark Lynden and Lou Hardy were also out on Saturday doing a previously undocumented line right of Right Hand Trinity.

There were a couple of other teams out in the morning on Sunday, and perhaps more later, but visibility had gone by then so not sure.

The attached pic is me setting off on Gwyn Ein Byd. 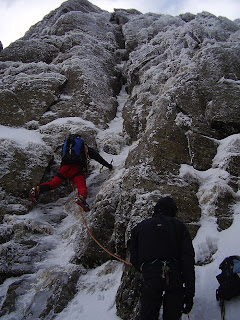 Posted by Mark Baggy Richards at 19:35