Friday delivered a dump of snow to the hills, which in a way was a shame as it buried lots of good routes that were in good nick. Yes, certain crags need some snow but not quite this much. However, it does mean there is more snow to resist a thaw.

Jonny Ratcliff and I headed up to the R/H side of the Ladders to have a go at Sarajevo. Unfortunately, there was a layer of cruddy neve covering the turf which itself was a little soft in places so we bailed. 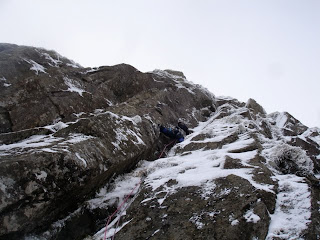 We moved about 20-30m right of L/H icefall and soled to the top of the crag taking in some good IV sections of ice and mixed ground.

From here over the crag X to do another new route. This came in at VI-6 with two pitches of 45m of good and varied climbing. Not the hardest of VI-6,s as it had good gear but we thought a really good route. 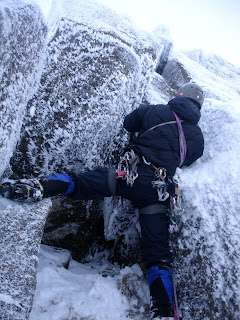 Toping out to a moonlit sky with no one around was a nice end to the day.

Teams were on Pyramid Gully , Central and L/H Icefall and teams backed off the Somme.

Sunday it snowed some more in the morning but overall another nice day. .

Sunday, Si Panton and team did the 2nd ascent of Arch Gully on Glyder Fach which myself and Owen Samuels climbed last winter. Si mentioned the words brilliant route and worthy of stars.
Posted by Mark Baggy Richards at 18:21