Nothing then everthing at once.

As the title says, it all comes at once

The big news story will be here on Tuesday

After another overnight snowfall, a dozen local climbers broke an early Sunday morning trail from Gerlan, heading optimistically for the Black Ladders.
As the snow got deeper, optimism gave way to realism and plans were modified to match potentially difficult and dangerous conditions. In the event, the snow, though soft and deep, appeared to be reasonably well-bonded to the neve beneath and showed little evidence of wind deposition, even in the upper reaches of the crag. Groups disappeared into the mist, climbing Pyramid and Central gullies (amongst others?), enjoying tremendous winter sport by sweeping snow off the ice and rock, digging out belays and swimming their way up the easier sections. Adventurous, technical, physical and sociable .... a great mix!

Deep snow on the slopes beneath Central Gully 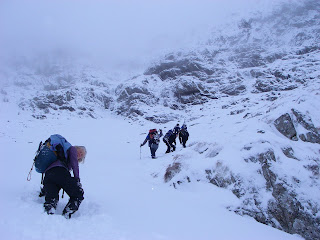 We think we climbed the Somme yesterday, but it was our first visit the crag and with visibility being fleeting we don’t know so!

The bit that’s confusing us is the description of a ‘pedestal stance’ at the end of the 3rd pitch (first proper pitch above the snow terrace at the base). From the big snow terrace after the introductory gully I climbed a cruddy iced corner groove, with reasonable rock gear at first, for about 30 metres to a ledge and crack on the left (should have belayed here!) and a large chockstone 5 metres above (newish sling and small bail out krab on this). I went under the chock and chimneyed up the back of it, before making hard skittery moves to reach some better turf. I wish we’d bailed too, instead of climbing another 35 metres of terrifying thin snow/ice crud up the continuing rightwards slanting corner groove, to a final steep pull over a bulge to the upper snow terrace. As we’d run out of rope and there was no decent kit at all we simul climbed – yikes.

Obviously conditions weren’t great, but the Somme got done last week and your blog suggests people backed off on Saturday (the sling round the chockstone was the only gear we found). The only route I can find with a description of a chockstone is Arctic fox, but the topo for that doesn’t square with the first III gully pitch we climbed to reach the snow terrace. Description of Post war doesn’t sound right either.

So maybe one man’s pedestal is another chockstone and we were just on The Somme in poor conditions. Wish we knew as it was the most harrowing day of the winter so far and we still can’t quite make sense of the description! 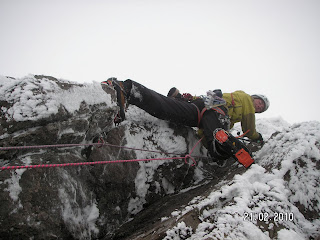 Posted by Mark Baggy Richards at 18:21