Once again, many thanks for your magnanimous write up of my recent,
rather modest winter achievements. As previously mentioned, it is an
honour to be given space next to the veritable who's who of North Wales
"big hitters".

After my New Years Day sojourn to Cwm Idwal ( where anonymity failed
rather spectacularly ), I must confess that a deeply disturbing
affliction was starting to build.

Despite my best efforts, the "darkness" was starting to beckoning !
Instead of the in-situ Sun Rock, Riviera and Gogarth guides,
inspiration on the bog was now being sought from a different genre
of publication !


A few days later, Ruth Willetts ( my fellow contender for the title of
chief winter- phobic ! ) and myself ( with newly refined disguise ),
sneaked back in under the radar for some more Idwal
"white shite" action.

Please find Ruth's pic of myself leading !!! the first main pitch of
Chicane Gully III. This should help to rectify and dispel, some of
the dastardly,semi slanderous comments of your New Years Day
report.

Especially in winter, I am a great believer in making life as easy
as possible, thus, as can be clearly observed, I am using some
fairly modern kit ( ie rigid, mono point crampons ).

The plastic boots and hard shell jacket might be considered
a bit "so last century", but these days, a man of my encroaching
twilight years,feels the cold a bit more than you youngsters.

I do realise and fully appreciate the benefits of using leash less
"streetfighters", but lets face it, I'm not the strongest climber in
the world ( as anyone who has witnessed my recent Beacon
performances will testify ), so I need all the help going ;
hence the leashes.

However, the axes have got lots of bends and squiggles in all the right
places, and don't seem to hurt my fingers as much as those old
school terradactyl beauties that I used to have.

Finally, the dashie mitts have been retired and the helmet is of fairly
modern, lightweight design.

As for the route, it wasn't bad at all ( and strictly off the record
Baggy ), both Ruth and myself almost enjoyed ourselves !

Since I may now have moved another notch closer to the N Wales
winter "Alumni" ( aspirant status of course ), I enclosed a tweeked
description of what is currently written in the winter guide.

P1, easy angled snow / ice leads to a stance to the left of the
icicle of Grecian 2000.

P2, up the gully to an easing at 30 mtrs ( possible awkward stance ).
Continue up the narrow runnel on the left, then snow slopes lead to
a good rock belay on the ledge to the left of the upper gully. 60 mtrs
in total.

P3, traverse right along the ledge, and climb the gully ( past another
awkward stance at a big thread ) to the top. 60 mtrs.

And with the above ascent, in a mere six days, I'd increased the
total number of winter routes I'd done in the
previous decade ,by 100 % ! 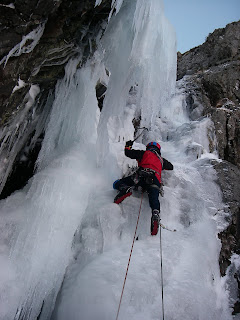 Feeling like Billy Nomates, I headed into Cwm Cneifion today on my own. Climbed Tower Slabs, Nameless Face, Hidden Chimney and two other unnamed short grade II/III ish gullies on the buttress to the right of the main Clogwyn Ddu crag (pics & explanation attached). Then headed to Y Garn to climb Boomerang Gully for some strange reason which I'll never really understand.

The Cwm Cneifion routes I climbed were surprisingly all in reasonable nick, some of the ice a bit wet, some brittle. It also looked like the ice on Pillar Chimney and Clogwyn Left Hand had survived well. Boomerang Gully was a sopping mass of wet snow. New snow falling down to about 600m in the morning, chucking it down once the south westerly had really taken hold by 3:30pm. Miserable afternoon! I wonder how much longer the Cwm Cneifion routes will hang on?

The two unnamed routes I climbed were really pleasant short climbs. I'd be really surprised if no-one had bothered to climb them before, unless they've just been overlooked on the way to bigger things. The left hand route was about grade II, a 12m (ish) section of ice and then straightforward snow. The right hand line was about grade II/III, possibly III, and had a 15m pitch of ice, then snow to a cave - looked like there was a good thread belay here - then another 15m of ice and onto easier ground (if you keep left - easy snow if you climb left immediately after the cave then head slightly right). Total length about 60m, splittable half way at the cave, good spikes available for belays. The two routes would make nice intro routes I think, useful for people to nip up if the queues are too big elsewhere! Routes marked in red on attached photo and the blue line made an uncomplicated convenient descent at just about grade I.

Hope any of this is useful. 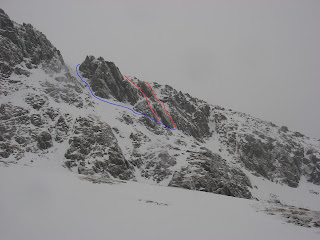 Posted by Mark Baggy Richards at 17:36