New route, another quality weekend, ladders features again . When will it end ?

Wishing to avoid the crowds I decided to go to the ladders. Rich Stone had sent details of good ice and and a route he soled on Thursday being in great nick. This route, was thought not to be in the guide and even though it may have been climbed he could not find anyone who had. So with this in mind he named the route and posted it on the wiki. Rich came along with Adam Harmer and I today and took a sharp exit after climbing the route with us to see the Rugby.

The route gives 4 pitches. 3 pitches of grade IV ice with snow and mixed in between, then grade 2 bomber neve up to the summit ridge. The route which is now called Follow Thru is considered to be between Daybreak and Finale and comes in at IV-5. Done before ? maybe ? , but needs a name and recording as its good. ( Is it actually be Daybreak ) However there are 3 lines in this area see below

Follow Thru goes up R/H ice line. Daybreak thought to be 1 to left. 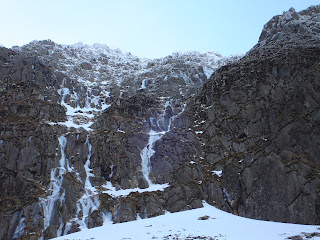 Adam and I then visited Crag X ( called for the time being ) and climbed a new route. Short by ladders standards but still giving a v good interesting climb. P1- 20ms at 2-III, P2 40ms at IV-6 and P3 20ms at V-6. This we called. Helmand Province.

After this we went and visited the R/H side of Craig Daffyd where we climbed another route which Rich had done last week. Again not recored he has named it Wayward Prong. This goes at grade IV-5. A short route at P1 15ms II- P2 55ms IV-5 then P3 50ms II-3. Nice route. 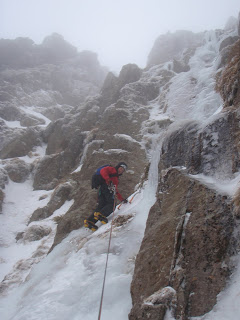 All the ice was bomber today, quite hard in places and as expected turf and neve were mega quality.

The mad thing about today was apart from the 2 folk we passed on the walk we came across no one.

Saturday many aspects of the crag were quite black apart from the upper reaches. However with new snow forecast tonight and through this week, it will be again the place to be.

For the second weekend running, Tim Jepson and Dodi Palmer got an early start 'knowing' that there would be a lot of climbers wanting to get on the relatively few winter climbs still in condition. But for the second weekend running they were mistaken, and found themselves climbing more or less alone ....... this time on the Black Ladders! Icefall Gully only gets one star in the guidebook, but Tim and Dodi found four long, excellent pitches of ice weaving a natural line up a series of steep grooves and slabs, leading into a huge bowl of bomber neve and iced rock. Definitely a three star route today, set on a magnificent cliff of scottish proportions. For much of the day there was light snow falling quietly through a windless mist, but it had turned to rain by the time we got back to the road. Only time will tell whether this new snow will bring more routes into condition, or whether the warmer air will spoil the existing ice.

Dodi on R/H Icefall on Sunday 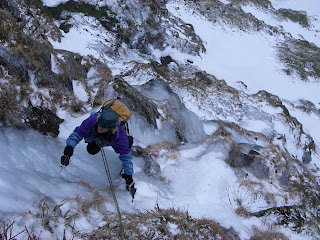 Just read your blog posting from the guy that went to the ladders yesterday - the Somme looked thin to me and Tim too but, once on it, it was all there and in fact in great condition - well recommended. The only thin bit was near the top of the first pitch above the terrace (3rd pitch) where ice ran out at top of groove giving a couple of mixed moves before starting again. Possibly worth 6 for this pitch in these conditions. The main icefall was thin (all tied off screws) but in stonking nick otherwise.

Back to last week

As noted above, Rich Stone has been out on the Ladders last week. Apart from Follow Thru and Wayward Prong he also
soloed an entertaining line on the ladders wednesday 10th. Up eastern, right arete of playschool 1st pitch 3/4, steep narrow 4 ice that exits top left of 1st snow field (done by Ian whitehead on sunday with escape back along ledges to eastern). Then directly up arete between eastern and playschool well exposed 3/4.
Posted by Mark Baggy Richards at 19:30