It seems so long ago since I posted on here and so long ago that we had winter. However, winter has only been gone a week, yes it has only been a week and if your like me ? I am already getting anxious for more.

So what were you doing on 8th Feb ? Were you lucky enough to be bagging a Cold Climbs tick or not ? Think back, it was the weekend Cascade was in nick alongside the Appendix.

There has been quite a few Cold Climbs ticks being done in North Wales of late. Well here we are folks, another classic tick, Trojan and its in stonking nick, sorry, I should say was ! on Feb 8th

Trojan is to be found on Cader Idris on the north face of Cyfrwy. First climbed in summer in 1974, its first winter ascent was in 1979. J Codling, J.A.Summer and G Kirkham claiming the prize and what a prize it was. Imagine being back in the 70,s, without all your modern kit and finding yourself standing at the bottom of 300ft of ice. Not any ice, but a splendid line and un climbed.

"Trojan is a slabby 300ft corner rising from the back of a small amphithere. Its streak of near perpendicular ice beckons siren-like and sinous, calling to every ice man worth of the name to come and climb"

"The purity of the line, continous ice and exposure made it feel better than on the Curtain or Hadrian's Wall on the Ben. It had something of the feel of Zero Gully about it, except it was harder"

With a description like this ( taken from Cold Climbs ) its more than enough to get one pysched. But for many, they have never heard of it or do not consider it as its not associated with the Ogwen and Snowdon areas. Well your missing a beauty, but the Ed Brothers did not. They claimed the prize and if I was them, a smug prize it was, To add salt to our wounds it was in great nick, but for Dave Evans and Pete Harrison, minus me as work was calling, it was not to be. They made a last minuite dash, filled with hope, the following Friday and it was a day to late.

The route can form with a reasonable frost and does not need any snow to make it climbable. So keep your eyes on the ball and it could be you on the photos one day with another tick in the bag.


I leave you photos of Ed Booth and Adam Booth, AKA 'the Boothy Brothers'! from the 8/2/2009. Seems their choose of venue and route paid off that day. Nice one Lads, envy of many no doubt. This is one that got away for me. It was planned but any plan needs action.

See you next week with more updates. 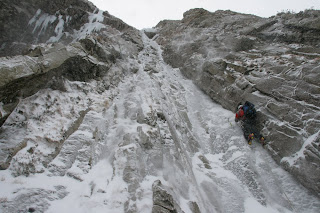 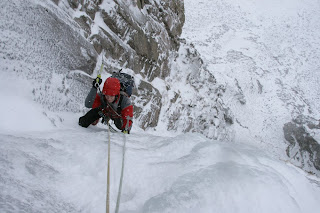 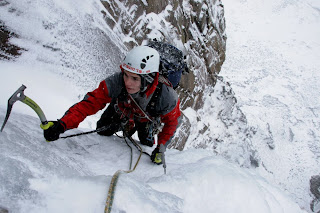 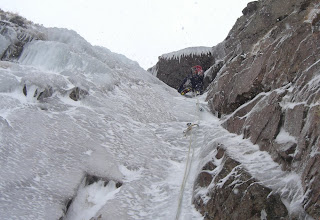 Posted by Mark Baggy Richards at 23:20