Sad Day For All - Its Over Folks

This recent, superb spell of winter climbing in North Wales, I do believe, is over. It went truly warm yesterday and this morning it was all very claggy, damp and very warm. This news will shock and stun many people as over the last few weeks we have had it so good. Just last Sunday, Si Panton ( of Ground Up ) and I were discussing what to do. We had so much choice, this was not something we were used to.

The buzz and atmosphere, here in North Wales, has been unlike anything I have experienced before in winter. There is going to be an empty gap, lost souls wandering the high street in llanberis, hanging out in V12, drowning their sorrows with coffee and having to go back to a normal life.

This has been, one hell of a period, for the winter climbing scene in North Wales. The variety of routes in nick, the quality of routes climbed, the mass of new and exciting routes claimed, second ascents achieved, falls taken, and big guns in town.

But fear not, winter will be back, we have not seen the last, so keep that gear to hand and be coiled ready for the next hit.

To help pass those long lonely dark days and nights, the blog will not come to an end. I will input a variety of posts to help keep you remain focused, motivated and entertained until next time.

Thanks for all the info, pictures and support overt the last month,

I leave you, with what I think was the the most impressive piece of action this winter in North Wales.

Unclimbed since 1998, with only 2 ascents, One by Paul Pritchard, 1996, 1 point of aid and one by Nick Dixon, 1998, free, graded VII-7 possibly harder, maybe VIII-8. Early this season with the crag well rimed up and going into slightly unknown territory Rocio Siemens decides to give it a shot.

We have all by now, heard of the 40 footer she took as her axe popped as she was about to clip a piece of pro. Only slightly phased! she went back up for another go ! this time taking a line slightly more to the right, which yields more pro. Getting further this time and upto what she thought was the crux, she called it a day and we abbed off.

Two ascents came quickly by some handy teams and both the leaders fell of the crux, one having to resort to aid, the other being lowered down, runners in place then re-ascending. It was not until the 3rd ascent by Ian Parnell that it went truly free and the grade settled at VII-8 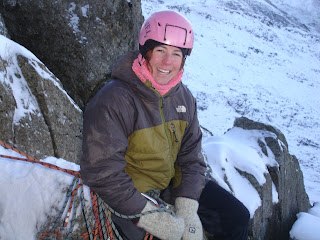 Posted by Mark Baggy Richards at 20:11

Glad I got out for one last go Thursday....