Friday I climbed Cascade( V/VI ) in the Pass. Having waited 20 years to climb this Welsh Classic I got my chance. Having drove down the Pass on Friday to check conditions out, I was surprised to see have much ice there was. Game on I thought. I spoke to Si Panton later that day and found out that James Mchaffie and Jack Geldard had made on ascent that day. Thats Fridays plan then.

So Dave Evans, Andy Teasdale and I left the road at 6.00 am Friday morning. I was sure Si would be making it up there also, so I was keen to get there before him and I did. Si arrived an hour later. However this did not really matter.
What a route, the ice was tops, we split it into 3 pitches as to have 1 each. Arriving at the top we were all dead chuffed. Cascade done and its only 10am.

Tim Blakemore and Tasmin did an early ascent of Cascade Saturday morning, saying that it was like a circus after 10.am

Me on first Pitch of Cascade Friday morning 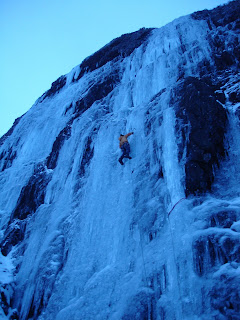 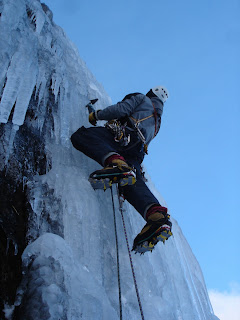 Dave Evans setting off on top pitch of Cascade 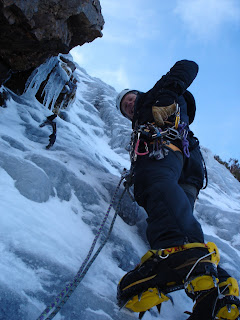 We then climbed Groove Slab ( IV ) today it was thin and felt harder more like V with little pro on the first 30ms. After this we went over to the Equator Walls area. We went up the Gutter ( Grade 1 ) which is to the left of Face Route and pieced a potential new line together. This being a mixture of ice and turf, Graded IV/V. This we called Costa Del Peris. We then climbed another ice pillar/wall and called this Face Off Grade V. This will have been done before and as it is not recorded anywhere we have named it. 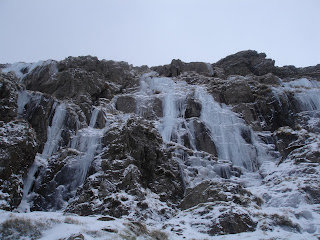 Tim Neil checked out the Devils Appendix on Thursday and decided a few more days would see it in, so planned for a early start Saturday morning. This paid off

Tim on the first pitch of Devils Appendix this Saturday morning. Not a bad 3 days for Tim ( see below )

Lou Neil on top pitch of Appendix- Such a cool route, like being on a different planet, but we are only in Idwal were Lou's comments. Maybe only idwa Loul, but it is one of the best ice venues in the UK.


Tim Neil and Toby Keep blasted up to the Black Ladderson Friday to find it plastered in snow, rime and a lot of ice. They climbed Western Gully another true Welsh Classice one of a few routes which had eluded Tim and Toby over the years. They reported good and interesting conditions, not bomber , but who needs that. There were teams on ice Fall Routes on the right hand side of the crag.

Tim has just returned from a v successful trip to Patagonia with Matt Stygle ( see news link ) well, when I say just, I mean Wednesday evening. Having arrived in the midst of the best winter for 12 years he had no time to relax. So it was Idwal on Thursday, the Ladders on Friday and ?? today. Seems like there is no stopping him apart from a JOB !


Tim setting off on Western Gully 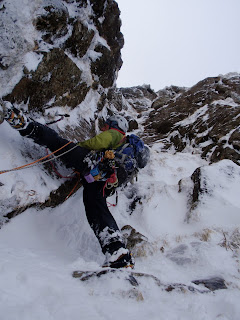 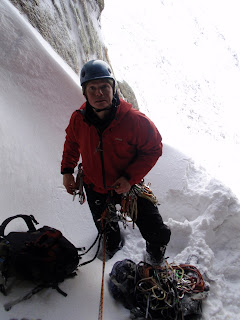 Toby sending the slab pitch on Western Gully. For some this is often the crux, but not this time. 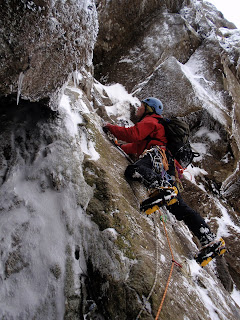 Idwal is in good nick on many routes, rumours are, that Cwm Dlyn is in nick, there is talk of Cwn Silyn being in nick. North Wales is buzzing and awash with enthusiasm. 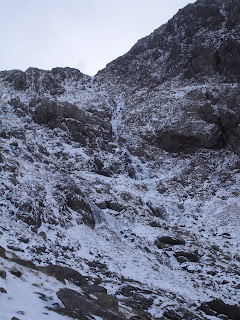 Face route is in really good nick, alongside all the ice to the left.

Berwyn was in Idwal on Saturday, he reported good conditions on Introductory Gully as well as great conditions of other routes in the Cwm, Just look at the picture of Idwal, Berwyn sent in, it is tops ( see pics below ) 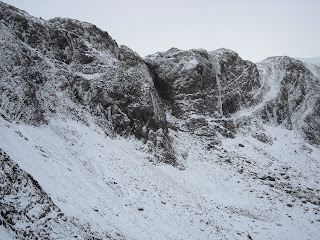 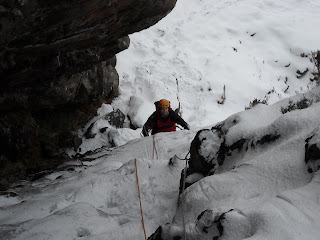 It is brill out there. Conditions have come in really quickly over the last 1-2 weeks, in particular the last 5 days. Crags are covered in snow, there is a lot of ice around and the turf is frozen in many places. Bring it one !

Have a good one
Posted by Mark Baggy Richards at 17:14

Hi Baggy,
Went up to Cloggy yesterday (Saturday) with Chris Forrest but found Jubilee Climb occupied by a group that seemed to be in situ & Black Cleft yet to come into condition above the ice; i.e turf wasn't frozen yet. Jack Geldard, Ray & Streaky were ahead of us on this one! Better luck next time.
Lots of good ice to the left near Boomerang but little else as yet.
Geoff B

Hi Geoff, shame that, in regards to conditions. Gloggy was on my list to visit this week, i will leave it for time being

Get on Cascade if you have not.

good to see out a lot