All snow is top Neve

After a thaw last Wed/Thurs all the old wet snow has been transformed into super neve as temps have dropped. Any ribbon of snow could be climbed with ease with crampons on.

Today I visited the Trinity Face on Snowdon. Iwan had never worn crampons before and was keen to get on the snowpack. We started off in the bowl below the Trinty Face getting used to crampons and doing some skills. We then went and did Central Trinity ( grade 1 ). This was in ace nick with bone hard neve under foot all the way. In addition to this, there was small section which was a thin ribbon of ice which Iwan had no problems with. Topping out was a bit blowy though.


Iwan half way up Central Trinity and under flase impressions that Wales is always this good ! 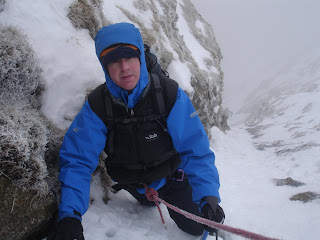 Main area of Trinity Face. Central Trinity is the R-Hand of the two obvious snow gullies which lead out from the snow bay which is sort of in the middle of the picture. 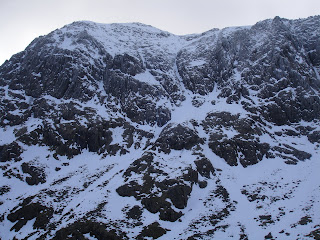 On the way back into the cwm we came across a small snow hole on the side of the train track. Snowholes on Snowdon a new one on me !

I bumped into a few friends, Ken Priest and Pete they reported great conditions on Right Hand Trinity ( II-III ) with v good neve and bomber turf. They said the gully was not stacked with snow/ice but this made it more interesting.

Ken ( enjoying his mighty flapjack ! ) and Pete, after topping out on Right Hand Trinity. Just look at the views behind them. 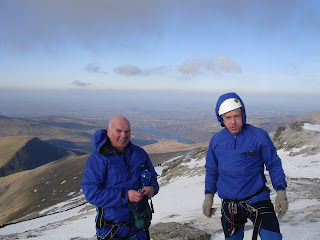 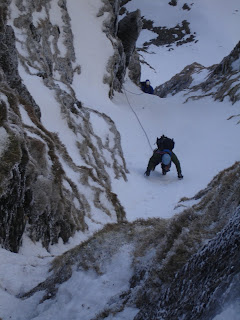 A great day out for any climber on the hill and with the forecast looking good, things can only really improve. Get on the sick.
Posted by Mark Baggy Richards at 16:09

Hi Baggy,
Was soloing about in upper Cwm Glas today; & would echo your comments on the quality of the neve. Even from the base of the upper cwm it was solid. Quite busy on the P.F.G. Stunning views but desperate cross winds coming down the ridge towards Cyrn LAs.
Geoff B

went up to Cwm Cneifion yesterday (Sun 1st Feb), did Clogwyn Ddu right hand. Good nick but not as iron hard neve as lower down in the cwm surprisingly! Good enough to romp up though! Had the crag to myself on a beautiful winter's day...one to remember. Catch you on the crags. Jamie B

Jamie B,
Was the Left Hand Branch in condition from what you could see? Does it matter now? It will be soon enough at this rate!
Thanx
Geoff B

i notced you climbed the appendix on saturday, nice one!

im looking to get over there this fri or sat early on and was wondering what it was like once you were on it?

was the icicle fragile?

and is there any rock gear on it at all?

cheers for any help