The blog title says it all. Friday was just that.

So for a round up of  recent events. However, before that, check these sticks out !! Quality, strength, precision, sexy and cool


Friday I was out with a group of School Students form Sharnbrook Upper School, Bedford. This school, well now an Academy have a very thriving outdoor department within school and the pupils do get to participate in lots of climbing and paddling as part of their school studies. How cool. They were in North Wales on a  Outdoor Education residential course at Blue Peris Mountain Centre ( check link for more details of a range of courses for schools, youth, adults, first aid, ML courses etc ) 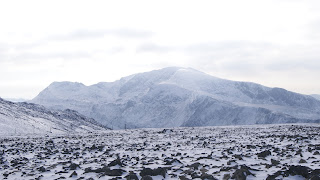 Dropping down to Bwlch y Brecan on the circuit 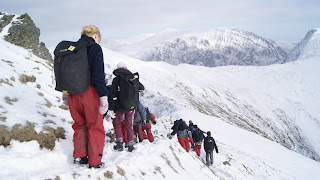 Lee Roberts and Andy Teasdale took a gamble on the Ladders on Friday and were rewarded with a fantastic day out.  With conditions not great on the cliff, by choosing a route which was steep, did not have the turf buried under the snow and with cracks clean ( no verglass/neve etc )  this choice allowed them to grab a modern classic.

Andy Takes up the story

Ey up Baggy one.

I went out with strong boy Lee Roberts on Friday. Amazing ! The Great Escape on the Black Ladders was the plan. Conditions were a bit challenging. A lot of the turf was well frozen, but there was plenty of poor stuff. The snow was mostly dry and un- supporting, but the cracks were easily cleaned and therefore gear was very good. Lee did a great job on the hard, or should I say very hard pitches. I took the  blunt end.  A fantastic route and all credit to Dave Hollinger and Rich Cross for their first ascent of it last year.

Here's a shot of Lee gritting his teeth coming to the end of the difficulties on the first Grade 6 pitch,  a great day out! 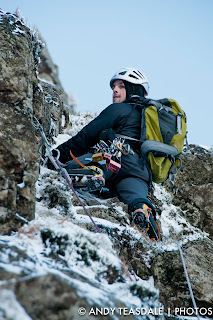 Chatting to Lee the grade may be a grade harder based on other routes he as climbed on the ladders. or it might be the conditions on the day. Anyway Mr Hollinger and Cross are strong B!!!!! and so are Tim Neil and Chris Parkin who repeated the route last year.

Geoff Bennett popped out after work to climb face Route in the Pass ( IV-4 ) This route is often in nick and gave a great evening out under the stars. Good plan as the weather was due to change in the early hours of Saturday ( which it did )

Friday, headed up to Clogwyn Ddu today with Adam Harmer. Lots of people out. Main routes looked busy. Started with Golden Girl Ali which was great fun with good steep climbing to start. Rich Stone  met us on the Gribin Ridge ( Welsh winter guide book fame and local new route activist ) and joined us on to do Lilas Chocolate Feast which was really good with delicate thin ice but good turf.

Then we popped round corner to Glyder Fach and Adam and I did East Gully Arête which was again very good with constantly interesting climbing and good frozen turf. Rich  stayed at the bottom and took pictures. 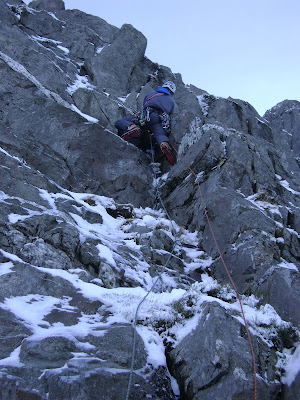 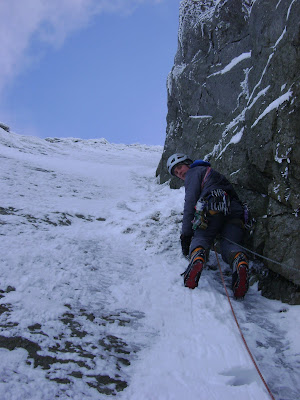 Lee Roberts went for the 2nd ascent  ( I think ? ) of  Tabasco Fiasco VI-7  on Glyder Fach adding a new more direct finish.  First climbed by Jon Ratcliff and Andy Scott, Lee thinks the grade is fine, quite a tricky pitch though. 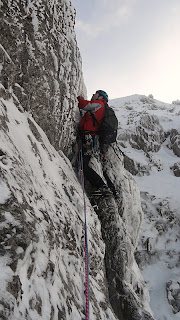 Simon Colley, Mark Walker and myself followed the summer line of Route 2 on Dolmen Buttress, Glyder Fach on Tuesday 31st Jan. The lower slope was followed more or less directly to the start of the summer route as it is described, giving a couple of steady pitches. Our third pitch, up a square groove and broken wall went at about 6 and lead to the belay below the first summer pitch. The next two summer pitches went in one, again at about 6 and lead to the large ledge below the final chimney. Snow was sparse in the final chimney, so we took a diagonal line out to the right, which eventually lead directly to easy ground above the main Dolmen Ridge pitch, about 5. The imminent school run prompted us to rap off into Great / West Gully from here. No ideas of a name yet, it might have been done before by the old Ogwen Cottage crew from years ago. Route 2 , Dolmen Buttress, V 6, would be fine by me.

Me in the chimney ( last year )  the lads avoided 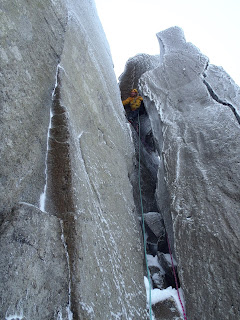 I ( Baggy ) went out with Simon Colley on Wednesday and when deciding what to go for on the Tuesday evening, I suggested the above route to Simon, he smugly said HA  ! it has been done and then brought me up to date. He then suggested the other lines on the crag and to keep things quite. Revenge is sweet !! HA I said, the others have been done ! by who he said ? by me and Andy Turner last year.  Ha ! how sweet.

So that crag is ticked, apart from one very minor, short pitch on one of the routes.