Two good days and two new routes to kick the new year off. Another VII in the mix

Seems the last few days have provided some good climbing with many parties enjoying the weekend and Bank Holiday.

Parties have been enjoying classic neve conditions on Snowdon, Cwm Glas, Nameless Cwm, Y Garn and the Ladders to name a few. Easy gullies have been transformed from soft snow to neve.

The neve on Y garn and Glyders is bomber. 25 people on Banana gulley !!!!
We nipped up C and B down A and back via the kitchen. Some Ice building there not much.

I walked into the ladders with Tim and Nick and met quite a posy of locals. Other teams arrived later in the day. Not every route was in, with some of the harder steeper climbs being a little black. We choose Artic Fox V-5 which gave 2 good pitches on bomber snowy turf.

Other teams were on icefall R/H, Holylands Climb and Pyramid Gully. Not sure what others climbed.

Chris Parkin just cannot stop, Only 3 days into 2011 and he is at it again. Another VII to his tally.

Report from Geoff Bennett today. Mind you Geoff is just as bad

Couldn't stop him I'm afraid; Cannon Fodder VII 6.5 up the thin turfy open grooves between Artic Fox & Cannon Rib/Menin Gate (?). Chris got the 2 hard pitches, I just had to pootle along & not worry about the long run outs. Chris will put the details on the wiki later.
All the best & thanx for the trax to the top!
Cheers Geoff 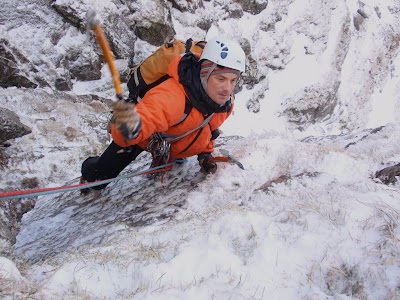 The forecast for Tues and Wed looks like its warm again. However, there is more chance of snow and temps dropping again Thurs / Fri so might be good near the end of week/week end.
Posted by Mark Baggy Richards at 17:48