Blenderhead - Was this Wales first VIII-8 ? 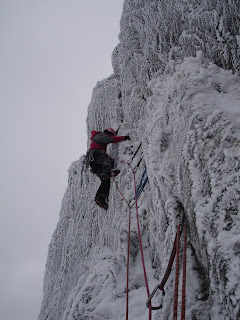 Back into Nameless Cwm, with ideas of grabbing the second free ascent of Blenderhead. This route of Paul Pritchards from 1996 used 1 point of aid. Nick Dixon removed the aid in 1998 and no one else has been on it since. To be fair only a handful of climbers had heard of it.  Nick gave it VII-7 but Nicks a hard chap so who knows.
I lead the first pitch V-5 and then Rocio blasted up the second and main meat of the route. It all looked strenuous from the belay and all was well until 1 of her axes popped.  That resulted in a 40ft leader fall and even after that Rocio then went back up. Hard as nails that lass. Due to a bashed shoulder and elbow she bowed out after trying the crux. Fine effort again after her effort on Glyder Fach last week.
Posted by Mark Baggy Richards at 14:31

Labels: before her fall, main crux pitch, Rocio on Blenderhead