Sitting in the van about to get ready, got me thinking! This is just a race around the Orme, well 6.5 laps, but lets face it, nothing like an Alpine Route. If that is the case why do I feel like I am about to embark on a North Face.  A knock on the widow distracts me; a mate has arrived who is also competing. Upon opening the door, he mutters the word, why do I feel I am about to climb an Alpine route its only a bike race around the Orme !!!!!

Sunday 30th September 2012 has arrived. The day I compete in my first official road race and with 6.5 laps of the Orme, high winds and heavy rain forecast then something tells me it’s going to be tough.

The front car drops the flap and the bunch is off, that pace is far to fast for me and I settle into my own tempo. Hitting the top of the final climb just before the Rest and Thankful Café progress slowed, a v strong head wind, which got stronger on each lap. That wind gave a battle around the tip of the Orme and down the descent the other side, blowing you all over the road at times. Into and through town one was able to get a move on and it was great knowing that plenty of marshals meant you could just peddle and make up time.

On the way up the Orme , I was surprised on how much difference the spectators made cheering you on. Something you see on the TV, but having not experienced it before it certainly gives you a lift.

Heading back to the Orme 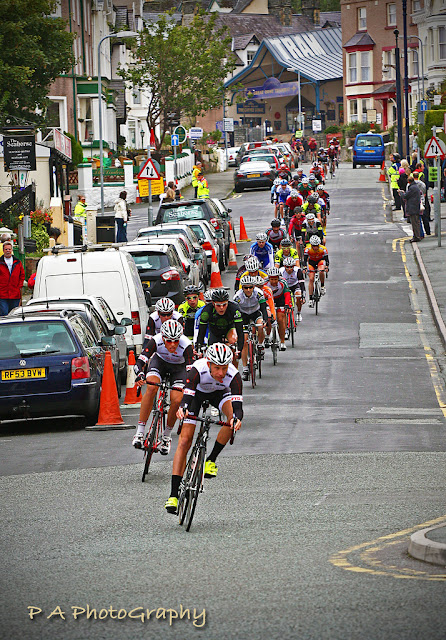 Picture courtesy of Rhos Cyling Club and P A Photography.

Lap 3 and the rain came, but I tagged up with another rider and we started to work together.  This meant that by lap 4 things were not hurting as much (maybe I should have been trying harder!).  Lap 5 and the lead car passed and told us the front bunch were on their way.  Once on Orme again, the front bunch went storming passed, then an official pulled up beside us and said race over when you get to the Rest and Be Thankful café. Reason because we had been lapped.  Quite a kick in the teeth to hear this, I was handling my own personal battle and felt disappointed to be told I could not finish.  Rules will be rules. But when you have some top category 2 rides and I am a cat 4 on my first race, then I am never going to match their pace in this lifetime.

So upon reaching the café, my race ended and my first road race was over, 32 mies and 3000 ft climbing,  it felt longer.  By this time the weather was grim and really wished I could complete the course, not one for giving up. Well there is always next time.

The race was organised by Rhos on Sea Cycling club. Full road closure, marshals, a tough route made for a great race.

The peleton heading up the Orme 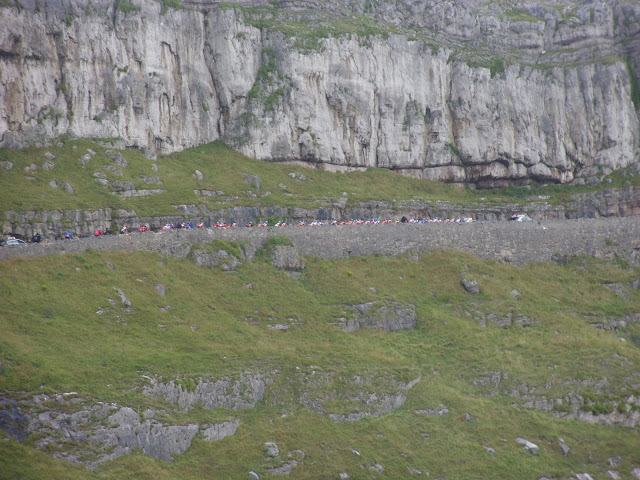 Posted by Mark Baggy Richards at 17:13