Not a week in and It is not even December

Chris Guest made the second ascent of Devils Dive in the kitchen, thinking the grade more VI than V-6

Steve and Mark climbed Gallipoli on the ladders reporting hard climbing conditions for the grade with little ice.

Conditions from the Kitchen

Minus 4oC at route base, still lots of powder except where its been packed down by walkers on the path. Teams were on Idwal stream and The Ramp. Most pure ice lines still not quite there but maybe doable for the bold. We climbed Coldhouse Crack, which was great fun, although the lack of ice means its more reliant on turf and even a bit of dry tooling! The turf is frozen where it needs to be but is not freezing yet under blanketing snow. If anyone does this route please can they have a go at retrieving our DMM Bulldog just below the top - its rammed in a crack. We ran out of time to retrieve it and we will buy a beer if anyone returns it (079068 191969). 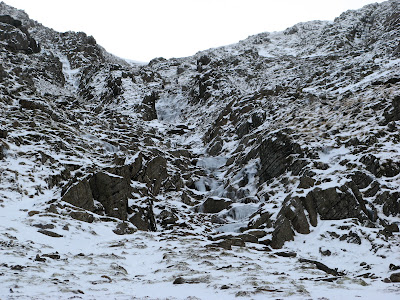 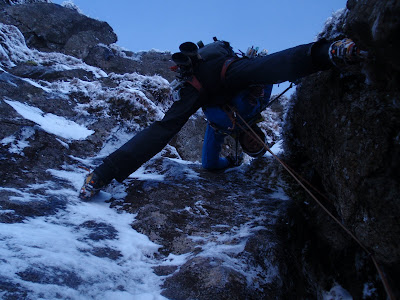 The stream and ramp got climbed a few times

Great start to the season, its all happening

Me, my bro Ed, and mate Roel, climbed Jubilee climb on Sunday. Occasionally some soft turf (I think just the turf with deep snow covering it), but mostly very good conditions, and most of the turf bomber. Cracking route!

All the best,
Ad Booth
Posted by Mark Baggy Richards at 18:32