It does seem slight strange writing this post, as conditions have been very good at times over the last 2 months and there has been a steady flow of new routes and I have been offline.  It was good to see Pete Harrison bagging Grey Ghost VI-6. When Toby Keep and I had first tried this line the slab had no ice and corner stopped us as it was to hard. I had mentioned to Pete some years ago, if he was ever up in that area to get the top corner climbed.  Well he and Rob Pitt managed to do one better they climbed the slab out left, very nice tick.

With recent conditions looking promising, after the last few seasons this winter is certainly living up to being one to remember with this late spell of climbing. Again, this shows that North Wales still has a lot to offer and there are plenty of keen bunnies out there.  Si Panton has been doing a good job on the V12 blog keeping us upto date with a variety of new lines being added to the Welsh Scene.

Hearing all the reports, looking at so many photos of quality climbing and speaking to so many climbers over the last few months it was hard to resist updating the blog nearly every day.  Regular users of the blog will be aware I went off line back in January. This was for a variety of reasons and I thank all the people who have let me know it has been missed.  I am afraid to say, this post is not a re-start of the blog on a daily basis.

This last week once the snow and winds had died down, I reckon there would have been quite a few climbers trying to decide what to do?  Avoid the crowds, take into account all this snow (none of which has not gone through a good freeze thaw cycle) not wishing for a wade fest and the ice not all being in great nick.  One things for sure, the ground was well frozen before all this snow fell.

With these thoughts in mind I ventured out onto the  West Face of Tryfan. I had last been up there in Feb 2011 with Glyn Callund, where we did the first winter ascent of  Flat Iron Ridge ( VD ) . This gave a nice steady route at IV-4.  I was keen to go back up and explore some of the other routes up there and try some first winter ascents.  This area is never going to give stellar routes but it has a lot going for it. Short approach, away from the crowds, easier grades and a mixture and climbing/mountaineering pitches.

I hooked up with one of my new route partners, Gaz Davies, who I had not climbed with for over year. He was not feeling that well and I was dealing with an injury so another good reason for our chosen venue.

First off we looked at Columbyne (VD) Approaching this direct (this is not shown in the new Ogwen guide) via mixed heather, grass and rock gave a mixture of short steps and a few spicy moments, as we still had the ropes on our back III.   We took a new line on the top pitch climbing between the top pitch of Columbyne and Pierrot. IV-5.  From here we traversed over and above the Wrinkled Slab Buttress and then dropped down the gully to the right of this.

We then choose  Jamie’s Route (S)   Taking a new line approx just to the left of pitch one as described in the guide, gave what winter mixed climbing is all about. Great hooks, great kit, cracking moves, steep but not overhanging techy climbing. 3 stars,  but only 10ms long.  Grade ?  found on a more sustained route it would be at least hard V, but it is a short a pitch, so IV-6 is more appropriate.  This was followed by 100ms of varied grade III climbing over rocky steps, slabs and chimneys. By this time the sun was out on the ridge and it felt like we were in the Alps.

Like all of us, I hope this snow has chance to change to neve and hangs around for some time. This will give some cracking climbing conditions. My thoughts are we have new routes on the way. With so much snow, there just has to be lots of thoughts out there by potential explorers.

Cwm Lloer has seen many repeats of established routes. The classic snow routes of N Wales I believe are going to give hard work, unless some kind person has put all the steps in.  The ice seems a mixture of good, poor and thin. There is ice where there is often just blank rock and many classic ice routes are not in nick/in poor nick.

I hope all of you got some winter action in over Easter if you were in North Wales.  With such fine weather just being out in hills walking or climbing should give a few days to remember.

Finally take care, there is a lot of difference snow conditions around, it’s so easy to slip, slide or fall into a hole, take it easy and stay switched on. 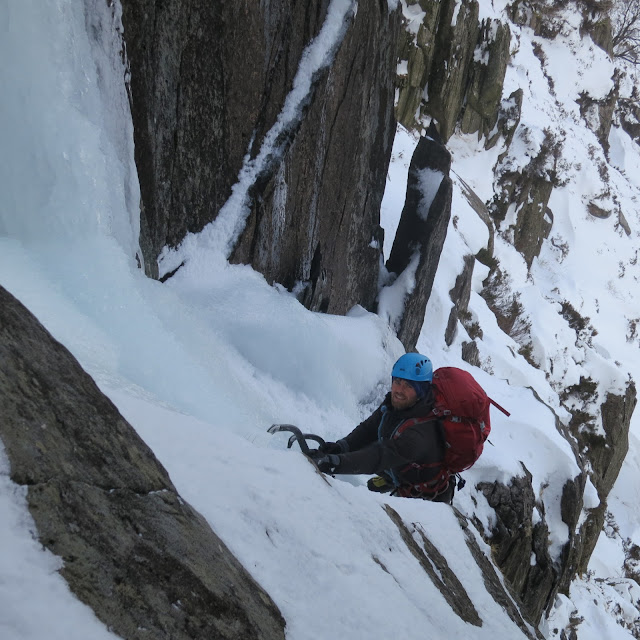 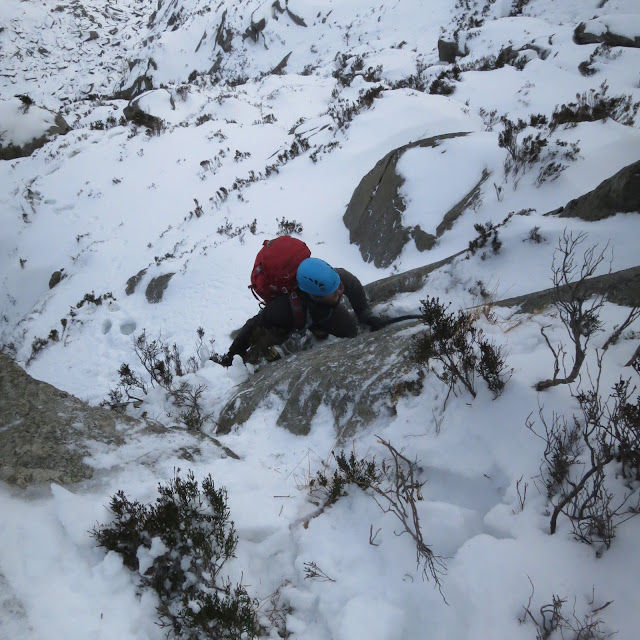 Posted by Mark Baggy Richards at 11:05