I am able to give you further info on the new route that got done on Tuesday.

It came form Pete Harrison,  who many of you will know has added some quality and hard routes to the Welsh winter scene over recent years, including Wale's first grade X-10 some time back.  Well now he delivers another X-10

Thanks for Pete for sharing the info, as he had to be pushed, as he very modest with his achievements.  I just felt it was such an outstanding route and contribution then it would be a real shame not to share it.  With this in mind, this post is factual without any glam attached.

Pete is also keen to ensure the style of ascent is recorded.

Text below from Pete

The route took seven days spread over 3 winters. One of the main issues with the route was getting it into proper condition .i.e being properly rimed up.


On the first attempt yesterday I fell above the lip of the roof and, not being in the fittest condition, thought I'd blown any chance of doing it that day. Tom had a go and fell from the lip. After an hours rest I went again powered up with Rhubarb and Custards and this time hung on and kept it together. We climbed ground-up with no pre-inspection. On the second pitch Tom slipped barely 2 metres out from the belay, lowered down and went again only to slip at the same spot. He climbed the second pitch clean from there. He could have lowered the fully 2m to the belay to start again, but it doesn't make any difference to the difficulty. He still did all the difficult climbing on that pitch clean.

Couple of other things - in terms of difficulty I think it's solid at the grade. However, I can only compare to other routes I've climbed or attempted.

An independent winter-only line tackling the compelling 'come-and-climb' me crack leading directly to and out of the sentry box belay of Stratosphere (E3), before joining Travesty at that route's mid-height steepening. The first pitch blasts directly up through the steepest part of the cliff giving a brilliant strength-draining pitch. The second pitch is more technical and no pushover. A route of the highest quality, solid at the grade.

22m  10  Climb turfy ledges and a corner until below the roof. Arrange gear and move across rightwards to a ledge at the top of the rock fin. A stein-pull gains the lip of the bulge/roof where things quickly turn difficult. Make hard moves leftwards along the lip to reach a vertical crack which is followed to a belay in the sentry box. Sustained.

43m  7  The diagonal crack which leads out leftwards from the top of the sentry box isn't as easy as it looks. Join Travesty just below the mid-height chimney and climb this and the gully above to a belay below the final steep wall. 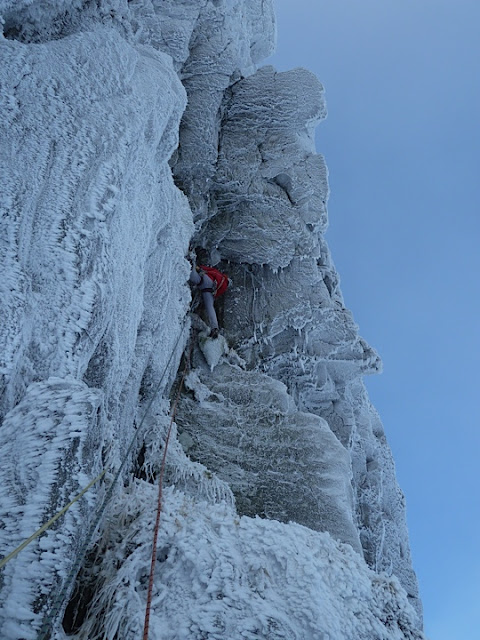 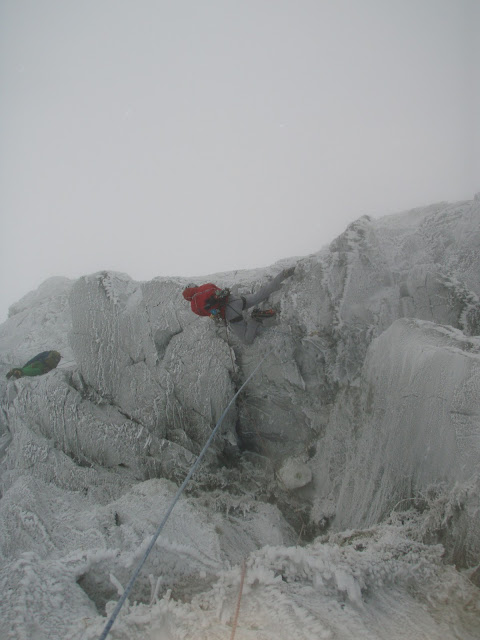 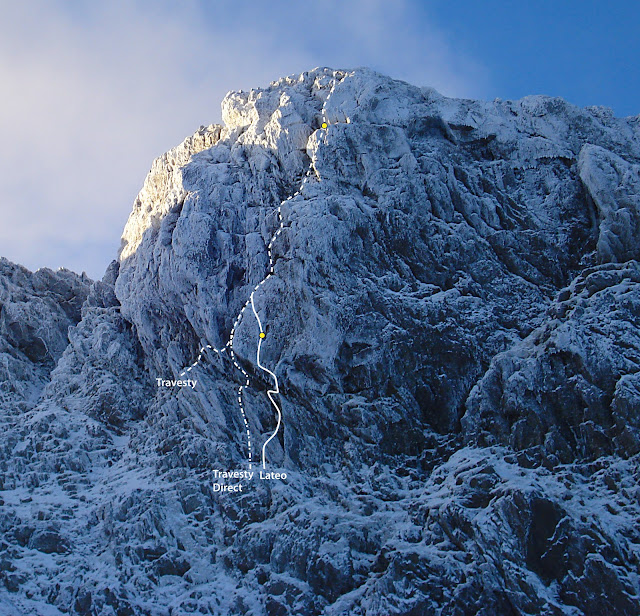 Posted by Mark Baggy Richards at 18:04