Today was the first day of winter when you could go climbing and it seems folk have.

Me and Big Tim headed up into Nameless Cwm, being one of the highest cwms in Snowdonia it is a safe bet. We were surprised to see how much snow there was and how low it was ( 500 m. ) Our main aim was to do Manx Wall as knowing the turf would not be really frozen this route relies mainly on rock in its upper reaches. with blobs lower down. However, the turf was not frozen at all, climbable ? maybe ? , but not really envrio friendly and not good for future ascents. Therefore, we opted for Pillar Chimney IV-4 instead. From the top of the ramp, there was a good old fashion thrutch in the chimney pitch and some slabby and Ice ground on the third pitch. 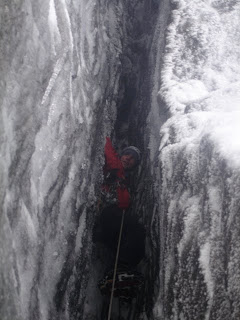 Top of the chimney 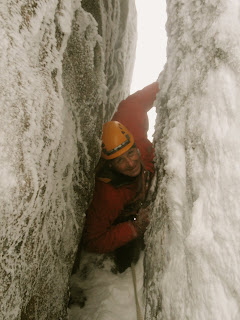 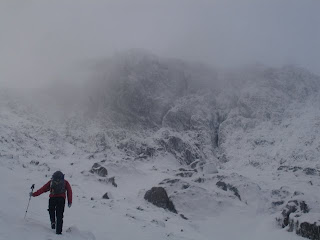 Olly Saunders http://www.rockandseadventures.co.uk/had a trip up the Trinty Face on Snowdon and climbed R-H - Trinity. Lots of snow, good rime, cold, turf frozen on surface all in all and very nice day out.

Pictures of Trinity Face ( Thanks to Olly ) 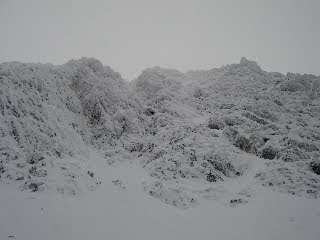 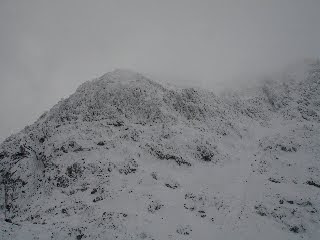 Some chaps were on El Manco VI-6 . One of Snowdonia's classic routes, great climbing, great atmosphere a top 3 star route. With the first pitch using a lot of turf and that not really forzen today, then it would be best to leave this for now. 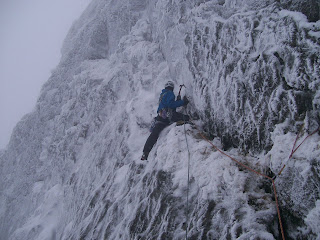 A picture from Huw Gilbert shows how much snow Cadair had on Saturday, so that will still be there. 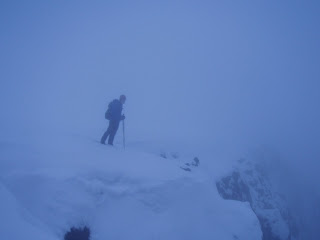 Finally with good forecast for Tuesday Morning, changing later in the day and week, then its a day to get out if you can.

Posted by Mark Baggy Richards at 15:59

Baggy - keep up the good work! As soon as I saw the snow out there I instinctively visited the blog.

p.s. I've posted a link to your site from our shop blog.

Nice one and thanks. Tim said you were going out Monday, did you ?